The developers of the open source Bittorrent client qBittorrent have released version 4.1.7 to the public on August 4, 2019. The new release is mostly a bugfix release but it introduces new features as well.

The program is a popular choice when it comes to the downloading and seeding of torrent files. It replaced uTorrent, a then-popular choice, when things started to get downhill for the project. The project included a Bitcoin Miner with the program in 2015 and promised soon thereafter that it would move away from the software bundling monetization model.

The maintainers of uTorrent launched uTorrent Web recently, a web-based version with basic functionality. Whether that was a long-overdue needed strategic change or the final nail in the coffin is still up for debate.

We suggested qBittorrent as a uTorrent alternative in 2012 and followed development of the application ever since here on Ghacks. The last major version of qBittorrent, qBittorrent 4.0 was released in 2017.

Tip: check out the following guides to make the most out of the program: qBittorrent Tips to improve the client, configure qBittorrent to block transfers when the VPN disconnects, understand the program's advanced save functionality, or search for torrents from within qBittorrent. 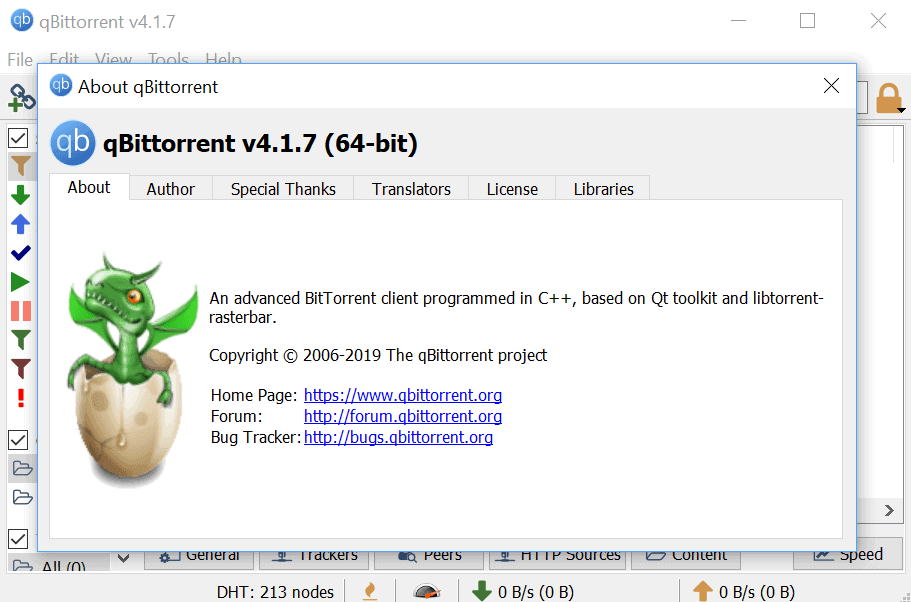 The new qBittorrent 4.1.7 is already available; users should receive update notifications when they run the client -- provided that they have not disabled the functionality -- and it is also available on the official project website.

The new version is a bug fix release for the most part. It adds two new features: first 12 hour and 24 hour speed graphs, and second, a new horizontal layout for the add torrent dialog.

The new release fixed a crash bug next to that which affected program startup.

Other changes of interest include the saving of updated resume data for completed torrents, a new function to avoid race conditions when adding multiple torrents to the client, and a bug fix for torrent checking issues.

qBittorrent users who use the client's RSS functionality may notice some changes as well. The client performs more RSS parsing in the working thread, ignores RSS articles with non-unique identifiers, and downloads the RSS enclosure element if no promper MIME type is found.

The new version can be installed over the existing version. It is recommended to create a backup before the installer is run.

Now You: Do you use a torrent client? If so which and why?

Article Name
Bittorrent Client qBittorrent 4.1.7 is out
Description
The developers of the open source Bittorrent client qBittorrent have released version 4.1.7 to the public on August 4, 2019. The new release is mostly a bugfix release but it introduces new features as well.
Author
Martin Brinkmann
Publisher
Ghacks Technology News
Logo

Martin Brinkmann is a journalist from Germany who founded Ghacks Technology News Back in 2005. He is passionate about all things tech and knows the Internet and computers like the back of his hand. You can follow Martin on Facebook or Twitter
View all posts by Martin Brinkmann →
Previous Post: « CryptPad is a privacy friendly alternative for Google Docs and Office Online
Next Post: Vivaldi to stop using unique user IDs in upcoming versions of the browser »