You are here: Home > Companies > Yahoo

Having the history of being one of the most popular search engine companies, Yahoo has plenty services rivalling other media giants. In this category, you’ll find loads of news on their latest features, services, and endeavours that continue to grow.

If you have been to the Yahoo Answers website recently, you may have noticed a big banner at the top stating that the site will be shut down on May 4th, 2021. […]

Yahoo announced this week that it will shut down Yahoo Groups on December 15, 2020. Yahoo Group users are informed by Yahoo via email about the shutdown timeline. Dear Yahoo Group Moderators […]

The end of Yahoo Groups? Not quite yet but close

Yahoo announced far-reaching changes to the company's Yahoo Groups service recently. The changes affect the visibility of groups, uploaded content, and upload functionality. Yahoo Groups was one of the world's largest discussion […]

It is time to opt out of Yahoo Mail email scanning

Yahoo Mail and AOL Mail, which both fly under the Oath banner, a Verizon owned company, scan emails that arrive in user inboxes to improve advertisement targeting. An article published by The […]

Yahoo revealed today that it will no longer support Yahoo Messenger, the company's instant messaging program, after July 17, 2018. Yahoo Messenger users can use the program like they normally do until […]

If you visit Yahoo Search right now from a location in the United States, the chance is high that you get more ads on the search results page than organic results. A […]

Yahoo released an important message about Yahoo User Security on the official company blog a moment ago confirming that information on at least 500 million Yahoo accounts was stolen in late 2014. […]

Yahoo announced today the roll-out of new mobile versions of the company's Mail application that introduce new features such as multi-mailbox management and password-less sign-ins among other things. The company launched on-demand […]

Yahoo shuts down Pipes, Maps and other services

Yahoo Inc. announced the shut down of several company products including Yahoo Maps and Pipes yesterday. Yahoo Pipes, which we first covered back in 2008 here on Ghacks, is one of the […] 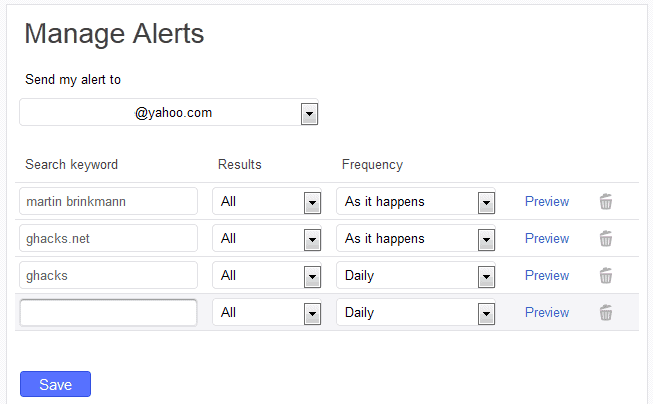 Yahoo! Search Alerts is was a Google Alerts alternative for Yahoo users. The service provided you with tools to monitor search keywords in Yahoo's engine and receive notifications when new websites or […]

YouTube is not the only online platform on which Internet users can upload, share and watch videos but it is without doubt the most popular one. While that is the case, there […]

Toolbars were quite common back in the gold old pioneering days of the Internet as they added functionality to the browser that you could not add in any other way to it. […]

How to access NSFW or adult flagged contents on Tumblr

When Yahoo acquired Tumblr in 2013. users of the platform had two main concerns. First, that Yahoo would introduce ads to the platform, and second, that it would limit access - or […]

Since most Internet users have fixed their eyes on Google, many may not have noticed that Yahoo revamped its image search engine back in June of this year. Image search on Yahoo […]

Update: It appears that Yahoo! retired Search Alerts. The link pointing to the page on Yahoo redirects automatically to the homepage of Yahoo! now. If you are running an online business, want […]

Yahoo! shutting down AltaVista and 11 other products in cleanup round 3

Yahoo just announced on the official company blog over at Tumblr that it will shut down twelve of its services over the course of the following days, weeks and months. It may […]

Yahoo Inc is in a different position than Google is. The company for some time now has been trying to alter the companies course away from the obscurity it is currently in […]

Toolbars have been quite useful in the past, and with that I mean ten or more years ago. The Google Toolbar for instance, available for many browsers at that time, added lots […]

How to check your recent Yahoo login activity

Reports started to appear on the Internet about hacking incidents of accounts over at Yahoo and while it is not really clear what is going on, it seems fairly certain that some […]

Anyone here still using Yahoo! Mail? I still have a Yahoo email account from back in the days when people used Yahoo's homepage as their homepage and Yahoo search for finding stuff […]

The last 24 hours have been filled with news of two compromised services. First victim of a successful attack was the social question and answer site Formspring. After being notified that a […]

If you want to view a photo on the popular photo hosting site Flickr in its original size, you need to click your way through a number of pages before you finally […]

Yahoo Axis Launched, Changes how you Search on the Internet

The basic search concept has not really evolved in the past decade or so. People visit a search engine like Google, Bing or DuckDuckGo, enterÂ  a search term there, and wait for […]

More and more Internet companies are beginning to implement 2-step verification processes to provide additional security against the ever increasing attacks on customer accounts. Yahoo! is the latest company to upgrade the […]

Phishing emails are a huge problem and one that numerous attempts to rectify have so far failed to achieve.Â  Now a large group of tech companies have joined forces with a start-up […]

Use Dapper To Create RSS Feeds From Any Page, Including Google Plus Posts

Lorelle just informed me that the public Google Plus RSS Feeds service Plusfeed has shut down because of an increase in pricing over at Appspot (which is run by Google apparently). It […]

Hobby and professional photographers often work with photo sets, and Flickr's option to create sets aids them in the creation, management and organization of photo sets. Managing a large number of sets […]

The largest test yet of the Internet's new IPv6 addressing system is taking place worldwide today.Â  Companies including Google, Yahoo!, Microsoft and Facebook are switching on IPv6 versions of their websites for […]

How To Translate RSS Feeds Automatically With Yahoo Pipes

I have shown you how to Combine Multiple RSS Feeds With Yahoo Pipes. Today I'm going to show you another very handy, and easy to configure, Yahoo Pipes construct: Feed translations. I'm […]

Back in December of last year Yahoo released a statement that they would close down several of their web properties. Among them popular social bookmarking site Delicious. The statement turned out to […]

Instant search results, results that appear before the search engine visitor even started typing, appear to be a relatively new trend that is pushed by search engine companies such as Google, Yahoo […]

"I'm bored... There's Nothing on the Internet!" The Argument for a Walled Garden

The call "There's nothing on TV" has long been a common phrase in households around the world, but now I'm beginning hear people express disappointment with the quality and availability of good […]

Back in October of last year, Flickr introduced an option to create a new Flickr user account by linking it to a Google ID. This made the signup process more comfortable for […]

The first global test of the IPv6 net addressing system will take place on June 8th, and Google, Facebook, Akamai and Yahoo will all be taking part, according to a report by […]

AltaVista and Delicious to Close in 2011

It's a sad day for search as Yahoo! have announced they're to close the AltaVista search engine.Â  AllThingsDigital report that cutbacks at Yahoo! are responsible for the decision. Other products to be […]