You are here: Home > Misc > Music and Video

The music and video industries are massive, and there’s plenty of online resources for enjoying them. In this section, we’ll cover various applications for downloading or streaming, the latest brand or tech news, and managing your huge collections.

Two months ago, the developers of the audio player Winamp released a first release candidate of Winamp 5.9. The player, which many thought dead and buried, came back to life and users […]

Disney unveiled upcoming price changes to its streaming service Disney+, Hulu, and ESPN this week. The company announced plans to increase the price of a Disney+ subscription by $3 to $10.99 per […]

A new version of the popular VLC Media Player application is available. VLC Media Player 3.0.17 is a cross-platform open source media player that derives much of its popularity from the fact […]

Intel removed the security feature SGX from processors of the 11ths generation and newer generations. Problem is, the feature is one of the requirements to play Ultra HD Blu-Ray discs on computer […]

Handbrake 1.5.1, released a day after Handbrake 1.5.0 was released, is a major new release of the open source video transcoder. Among the many changes are new system requirements for the Windows […]

A user on GitHub has published code in several repositories that allows anyone to download video content from several popular streaming platforms, including Netflix, Amazon Prime and Disney+. The repositories, created by […]

MediaMonkey 5.02, a new version of the powerful music management software, has been released. New and existing users may download the version from the official website, or by selecting Help > Check […]

The official website of Winamp has been updated. It says that a new version is coming. We have heard this before, so if you are a fan of the classic music player, […]

The Windows music player AIMP has recently been updated to version 5.0 final. We have followed AIMP development here at Ghacks for a long time. Our first tutorials, recording Internet radio with […] 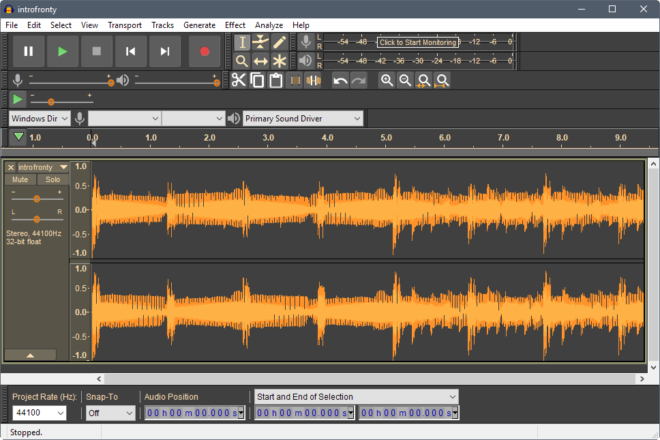 If you happen to have lots of media files on your system, you may sometimes have troubles keeping an overview. On which hard drive was that movie again that you wanted to […]

Future versions of the open source cross-platform audio editor will make use of Telemetry to improve development of the application. Imagine the following scenario: the ownership of a popular program changes and […]

Audacity is one of the most popular free cross-platform open source audio editors. It can be downloaded and used on Windows, Mac OS and GNU/Linux machines, and is regularly updated and quite […]

Audacity 3.0.0 has been released on March 17, 2021. The new version of the open source cross-platform audio editor is available for all supported platforms -- Windows, Mac and Linux. Compatibility notes […]

Back in early 2019, a first preview of what the developers called Winamp Community Update Project was released; designed to improve the original Winamp music player through its extensive plugins system, WACUP […]

The final version of the multimedia application Kodi 19, codename Matrix, has been released to the public. The new version is available on the official project website for all supported operating systems. […]

A new version of the media player PotPlayer has been released just a few days ago. The first PotPlayer release of 2021 does away with Flash playback support among other things. Ashwin […]

Google introduced a change to its YouTube video site this week that brings dedicated hashtag pages to the site. Hashtags are used by video publishers to label content; a tech video could […]

Twitch Leecher is an open source application for Windows to download videos from the streaming service. The program supports downloading broadcasts, highlights, uploaded videos, and pretty much any content that is available […]

Google released updates for the company's YouTube application for Android and Apple's iOS operating system recently. One of the changes of the update moved the autoplay toggle; it is now displayed in […]

Google revealed plans this week to monetize videos from publishers on YouTube that have not joined the partner program. The change takes affect in the United States first but will roll out […]

VideoLAN, the maker of the popular VLC Media Player, has released VLC 3.3 for Android today. The new version is a massive improvement over previous versions. Most of the work went into […]

A Look at Kdenlive Libre Video Editor for GNU/Linux

I have done my fair share (or more) of video editing in my life, primarily using Adobe Premiere Pro as I was taught in college. However, I try not to use Windows […]

Amazon launched its Amazon Prime Video for Windows application this month officially for Microsoft's Windows 10 operating system. Windows 10 users may download the application from the Microsoft Store and use it […]

Do you use Google's YouTube application on your device (if available) to browse YouTube and watch videos? If you do, you may have noticed the insertion of Google Search results when you […]

YouTube appears to be rolling out a new feature currently that brings chapters support to the video streaming platform. I use YouTube regularly to watch new videos published by some of the […]

Netflix announced improvements to the service's parental controls yesterday that introduce new options for parents to control Netflix viewing. While Netflix did support a profile feature already that allowed parents to create […]

Disney launched its streaming service Disney+ in 2019 in the United States and launched it in select regions and countries since then. A Disney+ subscription is cheaper than the cheapest Netflix subscription […]

How to reduce YouTube's Bias for Mainstream Media

De-Mainstream YouTube is a browser extension for Mozilla Firefox, Google Chrome and other browsers based on Firefox or Chromium code, that reduces the bias of the YouTube algorithm in regards to mainstream […]

If you like to watch Netflix on your Android devices, you may have noticed that streaming has become more efficient recently. The company started to use a new video codec on Android […]

Google accidentally includes videos of other users in data exports

If you need another reason why it is wise not to put too much trust in "the cloud", this may be it. Google is mailing users of the company's Google Photos service […]