You are here: Home > Misc > Network

There are many network solutions you can use for computers, servers, and mobile devices, while you also need to consider the security implications. While we’ll compare various products and brands, we’ll also provide news and guides for using them.

The developers of the open source application firewall Portmaster have released version 1.0 of the program recently. The version introduces support for new features and improvements across the board. I reviewed Portmaster […]

O&O Lanytix is a new free program by O&O Software GMBH to display all devices connected to a local area network. The program is compatible with Windows 8 and newer versions of […]

Instant Messaging is one of the most popular forms of electronic communication. You don't have to pay extra fees (not counting data charges) for chatting with family members, friends or colleagues regardless […]

GNS3 is a graphical network simulator which lets you to create a virtual network. You don't need any hardware like routers, switches, or even endpoints (workstation computers). This open source tool can […]

If you have a set of files that you wish to share with someone, but don't want to use cloud storage services, there are a few options that you can use. Syncthing […]

A few days ago I encountered an issue with a website. It was displaying a "disable your ad blocker" page; this particular site did not provide a choice in this regard as […]

The Wi-Fi Alliance, a worldwide network of of manufacturers and software companies, announced Wi-Fi 6 today based on 802.11ax technology. Wi-Fi 6 introduces a new naming scheme for Wi-fi generations that uses […]

Wireshark 2.4.0 is a major new version of the popular network protocol analyzer for Microsoft Windows and Mac OS X devices. The application is available as a 32-bit and 64-bit installer for […]

Network Drive Control is a free program for Microsoft Windows devices to configure network-specific drive mappings. One of the issues that you may experience when it comes to mapped network drives on […] 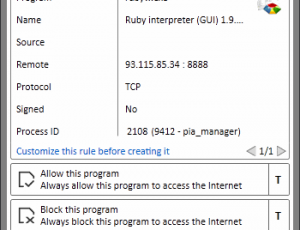 If you are using the popular VPN service Private Internet Access (PIA) and monitor outgoing network connections on your devices, you may have noticed that the program rubyw.exe attempts to connect to […]

The popular Wi-Fi survey and discovery application NetSpot has been ported from Mac OS X to Windows. It is available as a free, limited version only currently. If you are using wireless […]

Like 802.11n, the IEEE released a draft of the amendment before its final release. These early devices are known as â€œWave 1â€. Unless you 11ac router is less than a year old, […]

There is no such thing as perfect security. Given enough knowledge, resources, and time any system can be compromised. The best you can do is to make it as difficult for an […]

Today, WiFi is everywhere: coffee shops, restaurants, retail, hotels, sports venues, etc. We can access it from our laptops, tablets, and smartphones. At home there may be game consoles, smart home devices, […]

In 1947, the International Telecommunication Union (ITU), a UN agency, designated certain bands of the RF spectrum as ISM. The idea was to have an international standard of frequencies that were reserved […]

QuickMon is a powerful monitoring and alerting software for Windows that you can use to monitor specific local or remote events and receive alerts about them. The program is not the easiest […]

Ping Viewer is a portable domain and network monitor for Windows

If you want to make sure that network resources or domains on the Internet are accessible, you have plenty of options to do so. While you can run tests manually, it is […]

Boot computers from a network with PXE Boot for Windows

It may sometimes be useful to boot one or multiple computer systems from a network computer instead of locally. Maybe you want to boot another operating system or an update but the […]

Advanced Network Configurator addresses the decade old problem of configuring Windows PCs to connect to computer networks using a single network adapter. The main issue that you will encounter is that it […]

Display which programs accept or have established Internet connections on Windows

How do you know which programs on Windows have established connections to the Internet or are accepting them? Some programs may reveal the information to you directly while others may not reveal […]

TCP Monitor Plus is a portable program for Windows to analyze network related connections and data on a PC running Windows. If you want to know more about the connections that your […]

Fixing remote network issues can be quite the time consuming tasks. While it is sometimes a matter of making a quick change to the configuration of one system, it can at other […]

Most Internet users strive to have a reliable network connection to the Internet, as it enables them to enjoy what it has to offer without most of the issues that may occur […]

Diagnose why you can't connect to servers or sites

While you can make use of specialized system admin tools to find out which devices have been connected to a local area network in the past, it is not really something that […]

Media Sniffer displays video and audio stream urls to you

When you watch videos on the Internet or listen to audio streams on websites or in applications like Spotify, you are not really exposed to what is going on behind the scenes. […]

NetTraffic is a free software program for Microsoft Windows devices to monitor the network traffic of selected network interfaces. If you want to find out how fast you are downloading or uploading […]

Bittorrent Sync review: synchronize files locally or on the Internet

Bittorrent Sync is a new file synchronization software for local area networks and remote servers based on the popular Bittorrent protocol that was announced a week ago. The program is not publicly […]

The file hosting and synchronization service Cubby recently entered open beta. It is a file synchronization and hosting service much like Dropbox, SkyDrive or Google Drive, but with a couple of extras […]

Virtualisation specialist zInstall have previously impressed with their products that include utilities to capture an existing Windows XP, Vista or any other operating system installation and allowing you to boot from it […]

How To Calculate a TCP-IP Subnet Mask

If youâ€™re a network administrator, chances are at some point you may need to set up a number of different networks on your IP range. In order to do this, you will […]

Virtualisation is the way forward, there's absolutely no doubt about this.Â  It all began as a way of saving money, and saving the planet, by running two or more operating systems, each […]

This article is the fourth and final part of a series on the basics of network troubleshooting. The tools covered in the previous articles (ping, ipconfig, tracert and pathping) will be combined […]

This article is the third in a series of the basics of network troubleshooting. So far ping and ipconfig have been covered. Now tracert and pathping, which are similar commands, will be […]

We presently use application managers such as the Active Directory for the verification process while using the access credentials for various Windows Applications and other local network web applications. But as the […]