Virtualisation specialist zInstall have previously impressed with their products that include utilities to capture an existing Windows XP, Vista or any other operating system installation and allowing you to boot from it on any other computer from an external hard drive or suitably-sized USB pen drive.Â  This software meant you could take all of your programs and files with you and work with them as though that operating system was installed on the host PC.

Now they've expanded their virtualisation line-up into the server space with the new Zirtu Serverless VDI, type 0 Hypervisor.Â  Like other comparable products this allows users to run an operating system contained in a virtual machine on any othger computer, and use the full hardware resources of the host machine.Â  This includes full access to the graphics card, memory and the ability to take complete control of the processor.

The virtual machine in this case would be run from a server, enabling a single virtual machine to run on many terminals in a business simultaneously.Â  Where Zirtu takes things to the next level though is in support for working offline.Â  In a recent demo they demonstrate a virtual machine that has only just loaded to a machine, continue to work with support for all the programs and files when the network connection to the server is disconnected. 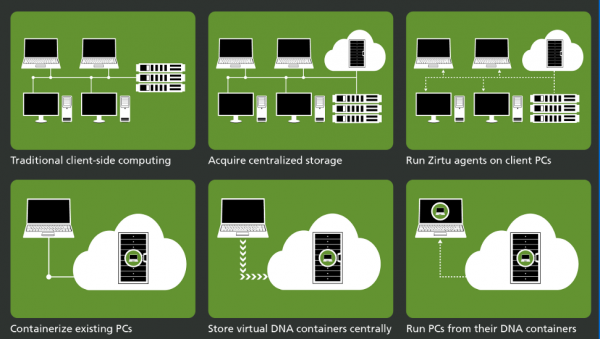 Where this comes in very handy is in permitting users to continue working on their PCs when their internal or tunnelled network connection dies, or when they are on the road and away from a connection.Â  The next time they log into the server all the files, programs and documents in the VM are automatically synchronised with the server, with the user noticing nothing about the connection problems.

Zirtu also uses existing virtualisation technology from the company that supports the computer's hardware in ways that allows a virtual machine created on one machine, to work on another with a completely different hardware configuration, something that would normally break any Windows installation.

The concept of having a decentralised virtual machine that can keep people working when away from a direct connection to the server is hugely compelling, especially when downtime can cost companies so much money.Â  The ability to maintain the VMs centrally can also present significant cost-savings to business and provide additional benefits.

Among these is a solution that would allow users to run VMs on their own personal laptops and desktop PCs, something that business normally bans citing quite valid security concerns.Â  This type of virtualisation technology turns any home PC into a work PC.Â  The fact that it works so well and so quickly, in the demo given at a recent conferenceÂ it's virtual machine was shown fully working after onlyÂ loading on the host PC for a few seconds before the network connection was pulled, is driven by technology the company is being tight-lipped about, unsurprisingly.

Either way this product demonstrates perfectly the types of virtualisation and cloud services that business might employ in the coming years to slash IT management costs, and to run better and more efficient IT operations.

Previous Post: « How To Calculate a TCP-IP Subnet Mask
Next Post: « Three Quarters of EU Firms Not Ready to Recover from IT Failures