Bittorrent Sync review: synchronize files locally or on the Internet

Bittorrent Sync is a new file synchronization software for local area networks and remote servers based on the popular Bittorrent protocol that was announced a week ago. The program is not publicly available yet and interested users can sign up to participate in an alpha test.

Program downloads are provided for Microsoft Windows, Apple Mac OS X and Linux systems. You need to install the program on at least two computer systems that are connected to the same local area network. Once you have installed the program on the first system run it and add at least one folder to it that you want to keep in sync between your systems.

You generate a random key during the process that you need to pair computer systems in the network. Note that you generate keys for each folder that you want to share. The key basically connects devices into a sync network. 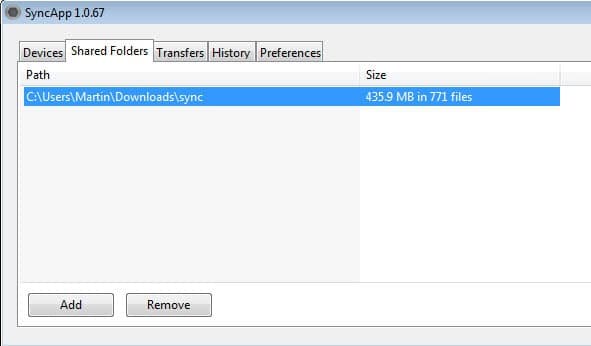 Once you have added one or multiple shared folders on the first system, run the Sync client on another computer system and use the previously generated key for the pairing of devices. The other system is automatically picked up and the synchronization starts right away afterwards.

The devices in sync are connected directly. Сonnection is established by use of UDP, NAT traversal, UPnP port mapping, and relay server. If your devices are in a local network, SyncApp will connect them in LAN and synchronize them without the Internet.

You can check current transfers and the transfer history in the interface, and also the devices that files are synced to. The preferences let you change the network listening port, disable NAT UPnP port mapping, limit the download or upload rate and change the name of the device that is displayed on other systems.

It should be clear that both computer systems need to be connected to the local area network or online for the synchronization to work, as no master server or cloud storage is used to cache files if that is not the case. 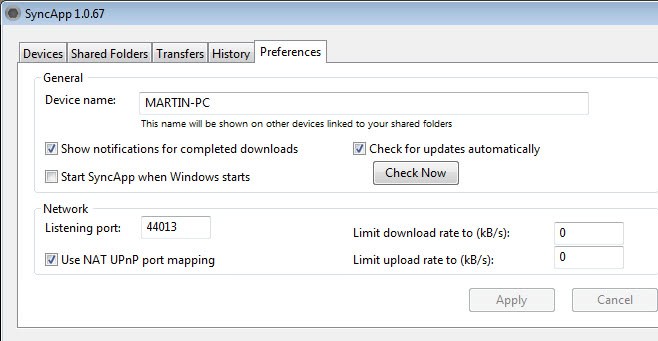 You can install SyncApp on all Network Attached Storages on Linux with ARM, PowerPC and i386 architecture. SSH access to NAS is required. SyncApp was successfully tested on devices from the following producers: Synology, Western Digital, Iomega.

According to Bittorrent, all traffic between devices is encrypted with AES 256 using a private key that is different for each folder that you synchronize.