While you may not agree with all decisions that Bittorrent Inc made in the past, I'm referring to integrated ads in uTorrent for instance that look and feel like torrents, you can't deny that the company is pushing out new software at a rapid pace.

The blog post (no longer available) fails to reveal important information about the service, and the screenshot that has been posted as part of the announcement is also not that helpful in this regard. The screenshot shows the transfers page of Syncapp where a couple of files are listed, each with its location and up and download speed. 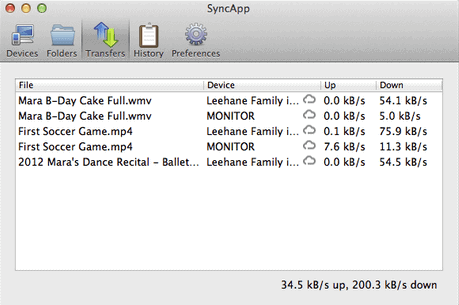 We have to look elsewhere for additional information about the service. Torrentfreak seems to have received early access to Bittorrent Sync. According to the site, Bittorrent Sync offers direct synchronization between devices without cloud storage. While that is great for privacy and device to device synchronization, it also seems to mean that the two devices need to be online for the sync to take place.

Installation seems to be straightforward. Users have to install the sync clients on all systems they want to use it on - currently that means Windows, Linux and OS X as well as NAS devices through a web interface - select a folder to share, generate a private key for authorization and use that key to sync data between devices.

. Places seem to be limited which means that not everyone who signs up for the Bittorrent Sync pre-alpha test will receive an invitation to take part in it.

You do need to reveal a couple of information about your current setup, location, email and name to complete the sign up form.