You are here: Home > Misc > Development

Software and web development is essential for the improvement of apps and features. To keep you up to date with new releases and updates, we’ll share articles so you can see what’s happening in this exciting industry, such as new plugins and tasks.

Microsoft has released .NET 5.0 final on November 10, 2020. The new version of the company's .NET framework is available for Windows, Mac OS, Linux, and ARM operating systems.Â  Microsoft promises that […]

GitHub released a beta version of its mobile application for Google's Android and Apple's iOS operating system in November 2019. The company announced yesterday that the two applications are now available as […]

3D Buzz was a community website for game developers and designers, and users interested in becoming developers or designers. Apart from the community aspect, it was home to a huge number of […]

Microsoft announced the discontinuation of MSDN Magazine earlier this year. The developer-focused magazine started out under the name Microsoft Systems Journal back in 1986 and got its current name in 2000 when […]

Scratch 3.0 was released on January 2, 2019. The new version of the programming language for kids is a major milestone release that moves away from using Adobe Flash to the web […]

Lighthouse is a free open source browser extension by Google designed to audit web pages and to reveal areas the site could be improved in. The functionality is also integrated into the […]

A look at KompoZer Web-editor in GNU/Linux

Some people code HTML/CSS oldskool in software like Atom, Notepadqq, or even nano/vi, but others enjoy using whatâ€™s called a WYSIWYG editor, which stands for What-You-See-Is-What-You-Get. KompoZer, is a free cross-platform WYSIWYG […]

Solomon Hykes, the founder of the major container company Docker, announced on March 28, that he will be stepping down from daily operations within the company, via blog post . Hykes started […]

A product announcement on the official Adobe Muse website reveals that Adobe will end support for the website building software for Mac and PC. The company released a final feature update yesterday […]

DNSTrails: find any domain someone owns

DNSTrails is a new Internet service that provides you with the tools to find any domain someone owns among other things. The service has more to offer than that, as you may […]

How to convert JPG and PNG images to SVG

Traditional image formats such as JPG, PNG or GIF are very popular, but they have disadvantages that makes their use less than ideal for certain applications. If you create a responsive website […]

Progate is a -- currently free- web service that teaches you various programming, scripting and other computer related skills. The service was established in 2014 in Tokyo, Japan, and has been made […]

Check websites for security and performance issues with Sonar

Google released a new version of the company's official development environment for Android, Android Studio 3.0, to the public yesterday. Android Studio 3.0 comes with three new features and updates to many […]

Use SiteVerify to verify links

SiteVerify is a free program for Windows to scan links and images to find out whether they are broken or work correctly. The application is compatible with all versions of Microsoft Windows […]

Oracle has just released Java 9, the new version and latest update to the Java platform, featuring improvements across the board. The new release includes a long list of improvements and changes […] 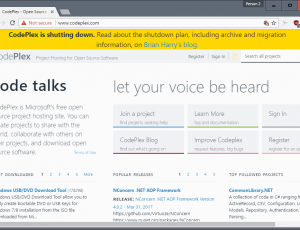 Microsoft announced yesterday that it will shut down its open-source project hosting website CodePlex on December 15, 2017. The company launched CodePlex in 2006 as a place to "share software". CodePlex enabled […] 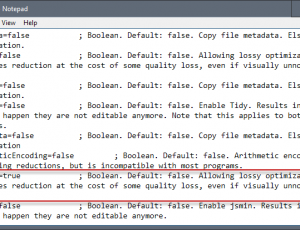 The following guide walks you through the steps of optimizing jpeg images using Google's new Guetzli compression algorithm. Google unveiled Guetzli some time ago, a JPEG encoder that promises up to 35% […] 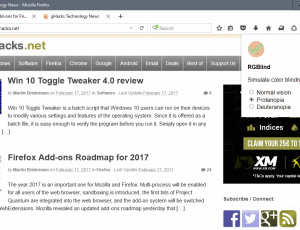 Color blindness affects a large percentage of the population. Studies have shown that up to 8% of males and 0.5% of females of Northern European heritage are affected by red-green color blindness […] 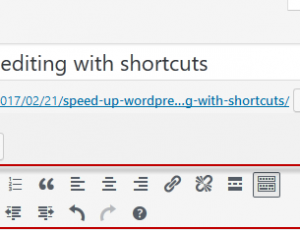 Speed up WordPress editing with shortcuts

A large part of the Internet is powered by the content management system WordPress. While some call it a blogging platform, WordPress is more than that thanks to its extensibility. There are […]

The most recent version of WordPress ships with new REST API capabilities which plugins, apps, services, or the WordPress core can utilize. The WordPress development team pushes new features to WordPress all […]

The search engine DuckDuckGo is working on improving results for programming related search queries using its instant answers feature. If you are a programmer, especially when you are just starting out, you […]

Refresh multiple browsers with a hotkey

Browser Refresh is a free program for Microsoft Windows devices that allows you to quickly refresh multiple web browsers with a single keystroke. Please note that refresh refers to loading open web […]

Microsoft showcased its Desktop App Converter program some time ago to highlight how easy it is to convert some desktop programs to Universal Apps format. The main idea behind the tool was […]

HTTPS Checker is a free program for Windows that provides you with the means to scan all pages of a website for HTTPS related issues. Rolling out HTTPS on an established site […]

Hide elements on a page in Chrome, Firefox and Edge temporarily

Some web pages annoy the hell out of me with page elements they display to me when I'm opening them in a web browser. Maybe it is this silly "we use cookies" […]

Microsoft's Windows 10 development for absolute beginners course hast just been published by the company to its Channel 9 website. The course is specifically designed for developers with little programming experience. While […]

Atom 1.0 Text Editor for coders by GitHub is out

Google Inc. runs a field test in Indonesia currently in which the company redirects mobile search users who are using slow Internet connections to a transcoded version of the original page that […]

Caddy is a 3MB web server for your home computer

Caddy is a powerful web server for home computers that takes less than a minute to setup and requires no deeper knowledge of webmaster or administrative services and technologies. If you want […]

The Beginner's Guide to Android Game Development by James Cho is a complete Android game development course for beginners who have little or no programming experience. Whenever I read a statement like […]

How to test quick changes to web pages before making them

Most developers use a local development environment that replicates the live website. They use it to test any change made to the website before it is pushed to the live server. This […]

When you visit a website in a modern web browser for the first time, contents get loaded from a web server to the local computer. While some resources may be loaded from […]

How to change the WordPress excerpt length

WordPress creates a lot of pages on a website and the majority of them are created by pulling information from single articles that you create. There is the homepage that lists the […]

Get a Website, Social Media and Competitor Analysis with Quicksprout

As a webmaster, you always need to be on the lookout for things to improve on your sites. This is less the case if you are just maintaining a private website, but […]

How to move comments in WordPress

I'm currently going through all aged posts here on Ghacks Technology News to update them whenever possible, or remove them from the blog if it does not make sense to do so. […]