Google may strip content off your site to make it faster on mobile devices - gHacks Tech News
ghacks.net

Google Inc. runs a field test in Indonesia currently in which the company redirects mobile search users who are using slow Internet connections to a transcoded version of the original page that has been automatically optimized for fast access.

Live is not easy if you are a webmaster. Not only do you have to keep up with the ever changing world of SEO and marketing, you also have to ensure that your sites display and function properly in all (modern) browsers.

This in itself is an issue even if you don't take script- and ad-blockers into account that may modify what a site's functionality fundamentally as well.

Google launched an update recently -- dubbed Mobilegeddon -- in which it rewarded mobile-friendly websites in search results. While it is still not clear how big of a deal it was on average, it is clear that Google is focusing on trying to improve the user experience for mobile users.

The new low bandwidth transcoder that the company is testing in Indonesia currently adds another piece to the puzzle.

The core idea is the following: if a page on a website loads too slow, it is turned into a mobile friendly version automatically by Google.

That mobile friendly version may have content removed from it. According to Google, experiments show that transcoded sites load up to four times faster.

Webmasters on the other hand may find this problematic for a couple of reasons. First, Google may remove content from the site that webmasters may consider essential.

Ads may be removed, scripts that power functionality but also menu items or sidebar widgets. Since there is no option to define what is being removed, core elements may be removed from websites when they are transcoded. 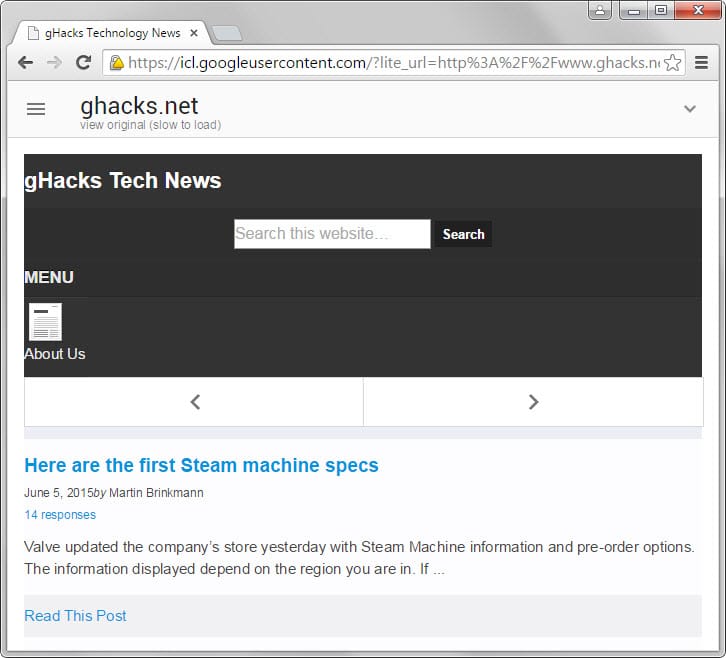 If you want to check out how a web page looks like in transcoded form, you can do it in one of the following ways:

To enable device mode emulator in Chrome, open the Developer Tools with a tap on F12. Once done, use the shortcut Ctrl-Shift-M while the developer tools are open to enable Device Mode in Chrome. Load the url afterwards to test it in the browser.

Webmasters may run a side by side test on WebPageTest as well to witness first hand how the original page loading time compares to the loading time of the transcoded page. 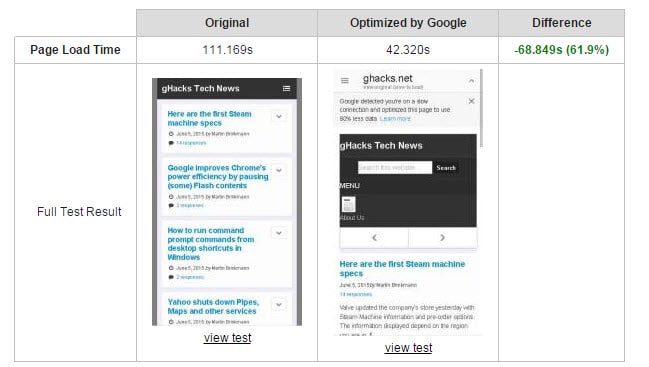 The company released a YouTube video highlighting the difference between unoptimized and optimized pages:

Transcoded web pages load faster than regular ones. According to Google, up to four times as fast which is a huge improvement especially for Internet users on (very) slow connections.

Google notes furthermore that it noted a 50% increase in traffic to those pages because of the speed improvement, and that the total size of a page dropped on average by 80%.

The main downsides from a webmaster perspective are that core functionality may be removed during the transcoding process. In addition, the site may not look like it is supposed to, and revenue may decrease because some or even all advertising scripts may not be shown on the transcoded page.

Only a handful of ad networks are currently supported including Google's own Adsense and DoubleClick for Publishers.

If you don't want pages to be transcoded, you can opt-out of it by adding a header to your site. The header "Cache-Control: no-transform" tells Google that the page should not be transcoded.


Google notes that it may label the opt-out in its search results though by indicating to users that these pages may take longer to load and may use more data.

Article Name
Google may strip content off your site to make it faster on mobile devices
Description
Google runs a field test currently to deliver transcoded pages to mobile users on slow connections that may strip off content from the original site.
Author
Martin Brinkmann
Advertisement

Previous Post: « Caddy is a 3MB web server for your home computer
Next Post: Atom 1.0 Text Editor for coders by GitHub is out »