Oracle has just released Java 9, the new version and latest update to the Java platform, featuring improvements across the board.

The new release includes a long list of improvements and changes like modularization support, better performance, support for new standards and more.

Oracle classifies Java 9 as a major release. The release notes highlight all major changes to the various Java components.

The biggest change, according to Oracle, is the introduction of the Java Platform Module System. It "introduces a new kind of Java programming component", the module, a named, self-describing collection of data and code. 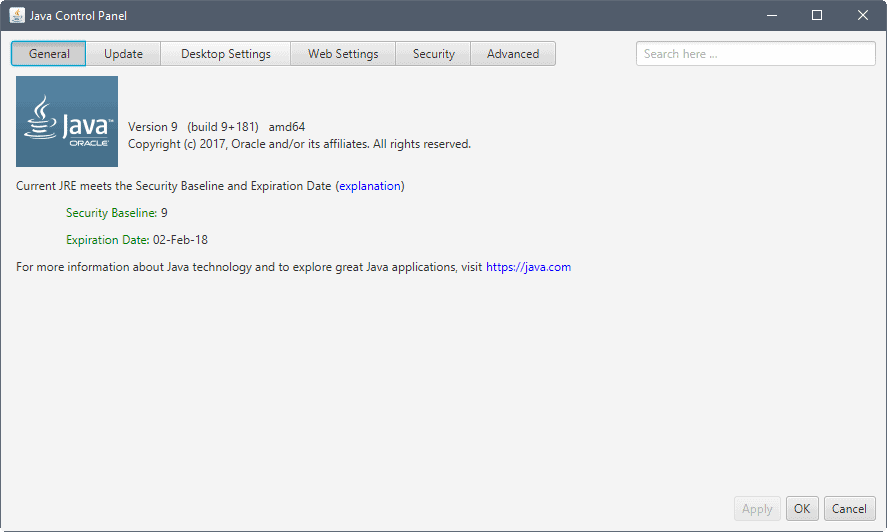 Java's JDK has been divided into modules which, among many other things, restructured the JDK and JRE runtime images which in turn improved performance, security and maintainability.

Most changes are important only to Java developers, but there are some that affect home users who run Java applications locally or on the Web.

Here is the list of changes that may be relevant to home users:

General features of interest include the disabling of SHA-1 certificates, better TLS support, and more.

Martin Brinkmann is a journalist from Germany who founded Ghacks Technology News Back in 2005. He is passionate about all things tech and knows the Internet and computers like the back of his hand. You can follow Martin on Facebook or Twitter
View all posts by Martin Brinkmann →
Previous Post: « The German Election: Street Fighter II Turbo Style
Next Post: Use SiteVerify to verify links »