There are many network solutions you can use for computers, servers, and mobile devices, while you also need to consider the security implications. While we’ll compare various products and brands, we’ll also provide news and guides for using them.

Asset scanning with nmap and ndiff

If you are in a small business or a larger enterprise you know you need to keep track of all those machines. Sure you could easily tag and record them as they […]

How many times have you had networking issues and not known exactly where to start? With Linux there are so many tools you can choose from. Add to that the choice between […]

I use secure shell a LOT, every day. So much so that I often take for granted how important this tool is. Not only does it allow me to log into remote […]

Backup your Linux box with rsync

In this Linux backup series we have taken a look at Flyback ("Quick and easy backups with Flyback"), Backerupper ("Simple gui backup tool Backerupper"), and Back In Time ("Linux Back In Time: […]

Use this iptables script for Web/Mail server security

Security. Ah, security. It's the make or break for administrators on so many levels. For the Linux operating system you could go in so many directions with your security. You could go […]

Manage your ssh connections with SecPanel

I do a lot of work with secure shell. There are times when I am connected, via ssh, to multiple machines. Managing these connections can be a real hassle (especially when you […]

Mail relaying made simple with Postfix

Have you installed the Postfix as an easier to use, more secure alternative to Sendmail only to find yourself having trouble with the old "unable to relay" errors? This can be very […]

Configure your Ubuntu Server as a DHCP server

Set up your new Ubuntu Server as a Samba Server

Map your network with Zenmap

Nmap is one of the most useful network discovery tools you will ever use. Nmap allows you to explore networks of any size to determine the following information: Port details Host details […]

Manage your Active Directory from Linux with adtool

Active Directory is one of those Microsoft tools that so many have no choice but to use. Although I much prefer LDAP because it is so much easier to set up and […]

How to: Install a LAMP server

If you've read enough of my Ghacks tutorials you have most likely come across mention of a LAMP server. If you are not sure what a LAMP server is: Linux Apache MySQL […]

Recently I wrote an article to help you secure your Linux Apache Installation (see "Five ways to help secure Apache on Linux"). In that article I mentioned using Apache's mod_security, but didn't […]

It is inevitable that IPv6 addresses are going to eventually take over. When that happens you will need to know just how to assign an IPv6 address in your Linux operating system. […]

Set your hostname in Linux

Map your network with Lanmap

This morning I needed a visual representation of my local Lan in order to find out what machines were associated with what IP addresses. For this task I used a tool that […]

How to install Nagios on Ubuntu server

Are you one of those special geeks that think there is never TMI (too much information)? If that describes you then Nagios is the monitor for you. Once installed, Nagios will keep […]

Network Access Control is a crucial aspect of medium to large scale networking. There are many tools to help you control who has access to your network; Some of these tools are […]

Set up a reliable ftp server with proftpd

If you have a need for an ftp server, and you have a Linux machine on your network, then you need look no further than proftpd. The proftpd project came about to […]

So you have that Samba server up and running and you can connect to it from Windows and Mac with ease. But when you turn to another Linux box that doesn't have […]

Connect to a wireless network via command line

I know, the first thing you are asking is "Why would I want to have to connect to a wireless network from the command line?" To that question I can give you […]

I have to copy files from machine to machine all the time. Most of the time this copying is done over a network connection. When using that transport method I always like […]

How To Select A Dedicated Server Provider

SSH is a way to remotely and securely access command prompt/terminal on another computer, giving you access to that computer's files, services, network connections and programs. Some services offer free SSH accounts, […]

Connecting to Wireless Networks in GNOME

Connecting to wireless networks in Linux has, for a long time, been a nightmare. Until recently wireless was often a deal breaker in Linux (especially with laptops.) But things have changed. Now […]

The most awesome datacenter ever!

If you are running dedicated servers, virtual private servers or even hosting accounts, you need some backup plans to cover eventualities. I was away for the last five days and had to […]

Do you know which applications and processes connect to the Internet on your computer? If you use a firewall chance is that you had to define rules to allow certain programs the […]

I'm using a desktop PC and a Toshiba notebook at home, sometimes both at the same time which is the case when I write an article about Windows Vista. The desktop PC is running Windows XP and I use the notebook with Windows Vista to test what I'm writing about. I do my research on the Windows XP PC however and find it convenient to use the clipboard across the network.

You might have encountered the term Port Forwarding when configuring bittorrent on your computer or analyzing slow or none existing traffic with bittorrent. One of the first answers of those helpful support guys in all forums is always check Port Forwarding, but what the heck is it ? 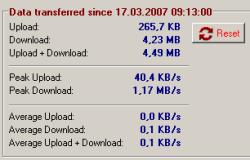 If you want to monitor your network traffic either because you have an account that gives you only a limited amount of bandwidth each month or because you simply want to analyze the traffic that is sent over your connection during a special period. Netmeter starts in a small window immediately starting to record outgoing and incoming traffic as well as other data such as peak upload and download speed. You can adjust the transparency level of that window or move Netmeter into the system tray. You can also adjust the colors of the graph if you like but the default values can be nicely distinguished.

Hamachi is a small freeware application that creates virtual private networks (vpn) on the fly without configuration at all - well almost. You can download the application from the hamachi homepage, once downloaded install and run the software. Versions for Windows, Linux (installation guide) and Macintosh OS X exist, means everyone should be happy although the linux and mac versions are console only while the windows one comes with a gui. Before I go into configuration details I want to describe the main advantage of Hamachi, it gives you LAN over the Internet.