Boot computers from a network with PXE Boot for Windows

It may sometimes be useful to boot one or multiple computer systems from a network computer instead of locally.

Maybe you want to boot another operating system or an update but the computer has no disc drive and only a slow USB 2.0 option or none at all.

Or you may need to maintain computer systems on a network using specialized software that you need to boot those systems from.

Another scenario is the installation of updates or operating systems on a large number of computer systems. While you could do so manually on 100 or more PCs, it may be faster if you are using automated processes for it.

PXE Boot is a free program for Windows that provides boot information on a network so that systems connected to the same network can boot using it.

One interesting feature of the software is that it supports synchronous booting of multiple computer systems once installed.

Installation should not be a problem. The first thing you need to do is install the PXE Boot software on the master system. This PC needs to be connected to the same network as the client PCs so that they can pick up the information it makes available. 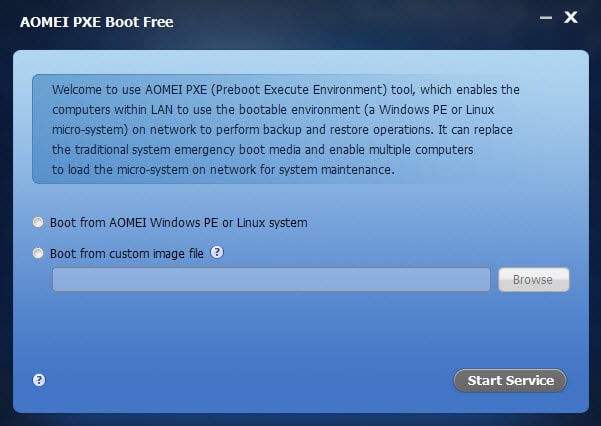 Run the program after you have installed it on the master server. It displays two options to you: the first to boot from a Windows PE or Linux system, the second to use a custom boot image file in ISO format.

Once you have selected an option click start service so that other computer systems in the network can pick up the boot information.

You need to prioritize network booting on those other computer systems and make sure that they are connected to the same network.

These devices should pick up the selected image automatically and boot from it.

The program has one limitation currently though: it does not support UEFI systems.

The program is easy to use and while you may need to change the boot sequence on client devices, it is not difficult to do.