If the graphics don’t have you hooked in the first few seconds, then the intro track will keep you watching until the end. Not even recent AI concerns like, Chatbots and ChatGPT will waver your anticipation for this upcoming action sci-fi thriller.

The trailer provides a preview into the year 2194, where the lead scientist of Kronoid Lab is committed to creating a safer world by introducing their most advanced AI Combat warrior to serve in the emerging war. With the Earth no longer being habitable due to climate change, the AI lab researcher prioritizes cloning the brain of a legendary mercenary - her mother. All in the hope of ending the civil war threatening to destroy what’s left on Earth.

As we continue watching the trailer, we catch site of advanced technology that has made survival possible in the hostile environment. Within the shelter, we can see futuristic devices and machines and the advanced armor and weapons the characters wear during combat. But not even these technological advantages can protect them from the harsh conditions and the danger lurking beyond their shelter walls.

The more intense the situation becomes apparent that humanity's fate is hanging in the balance. Although cloning the heroic soldier might be the answer to end the war, there could be more at stake. But will they succeed with this plan, or will they face extinction by Artificial Intelligence? 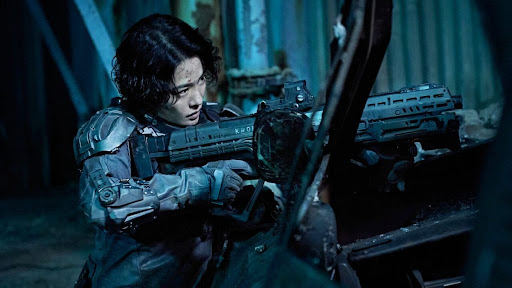 Ultimately this action sci-fi thriller trailer will leave viewers wanting more with its intense action scenes, awe-inspiring visuals and intro track that keeps you focused on the screen. Yeon Sang-ho has an inspiring, thought-provoking addition to the sci-fi genre.

The Netflix sci-fi film cast features Kim Hyun-Joo as JUNG_E, Park So-yi as Seohyun, Ryu Kyung-soo as Sang-Hoon, and Kang Soo-Yeon as Seohyun in her final role following her sudden death at the age of 55 in 2022 due to cerebral hemorrhage.

Starting on 20th January 2023, you can stream Jung_E on Netflix. But unfortunately, until then we only have the trailer to keep us enticed. Don’t forget to slot it in as a reminder, or you will be disappointed you missed out!