Having the history of being one of the most popular search engine companies, Yahoo has plenty services rivalling other media giants. In this category, you’ll find loads of news on their latest features, services, and endeavours that continue to grow.

Yahoo! Bids to get its cool back

There was a time when Yahoo! was the portal everyone went to for search and social groups online.Â  Sadly Google stole the company's crown and now Yahoo! has even slipped into third […]

Determining if a website is real or fake is one of the greatest challenges for many Internet users. Criminals have honed their skills in the past years to create websites that look […]

Dante just emailed me information about the purchase of Yahoo Hotjobs by Monster. We have seen Yahoo sell assets in the past and this is just another one of them. What's more […]

Toolbars are not necessarily installed as standalone applications these days. Toolbar developers have established business relationships with software developers to include their toolbars in software installers as third-party offers. Users who do […]

What Yahoo Knows About You, Ad Interest Manager

Companies have a lot of options to track desktop users on the Internet. This includes the use of cookies, Flash cookies and network related activities. All tracking options can be used by […]

Just as Microsoft and Yahoo! have joined forces in search, now Yahoo! Japan and Google have linked up too. Yahoo!'s Japanese search engine will now use Google's technology rather than stick with […]

The Geocities era ends today with the termination of the once popular free web hosting service. Some great programs and free websites where hosted over the years at Geocities which will no […]

We reviewed Yahoo Meme a while ago here at Ghacks and gave out several invites to Yahoo's Twitter-like service. The service was in private beta back then which meant that only users […]

Xoopit, a company that was bought by Yahoo not long ago, developed email indexing and photo sharing technologies that have since then be integrated into Yahoo Mail. Gmail users, among others, were […]

Yahoo Meme is more or less Yahoo's version of Twitter. It is currently in alpha stage and can only be accessed by users who received an invite from a user who is […]

Big companies are not only currently competing with each other in the search engine niche but also when it comes to webmail. It's actually the same three companies - that is Yahoo, […] 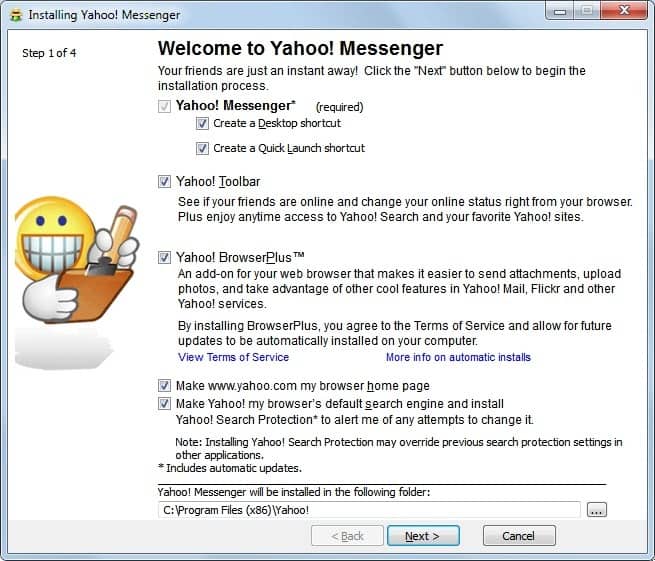 Yahoo announced upgrades to three of the companies major products and services. Yahoo Mail, Yahoo Search and Yahoo Messenger were all updated on the same day. Social integration was the key phrase […]

Well it seems that both Yahoo and Microsoft have reached an agreement regarding their search deal. You might remember that it has been close to two years that both companies have been […]

The Yahoo homepage is one of the most popular start pages on the Internet. To keep it that way Yahoo decided to add new features to the start page which can already […]

Tag Galaxy is one of those Flickr tools that visualizes Flickr image browsing utilizing tags and planetary constellations to show their related tags. A search for night for instance displays the related […]

Yahoo Pipes is a very sophisticated online tool which might look intimidating at first glance due to its technical nature; it is however not as complicated to use as you can create […]

Yahoo Music will Refund its Customers

Last week, Martin posted about how Yahoo was planning to shut downits Yahoo! Music store on 30th September, 2008. The store would take its DRM servers offline on this date, in effect […]

Flickr users have the option to turn off the show "All Sizes" option when uploading photos to the popular image hoster. This can have the effect that the original size of the […]

Yahoo Does A Microsoft

Show The Song That You Are Playing In Yahoo Messenger

If you perform a search for the major torrent website The Pirate Bay you expect it to be the number one search result for its main keyword due to its popularity. If you search for The Pirate Bay (the Piratebay, Piratebay) on Google you will witness that it is indeed number 1 but if you perform the same search at Yahoo you will not find the domain in the results list at all.

Just got word that Yahoo Search has started integrating information from Del.icio.us into their search result pages. Yahoo aquired Del.icio.us some years ago and I was wondering since then when they would start to combine the two online services to offer their visitors additional information.

If you have the intention to get a Flickr Pro account you might find the following deal interesting that gives you three extra months for no additional charge. A one year Flickr pro account costs $24.95 and gives you unlimited storage, uploads, bandwidth, sets, ad free browsing and permanent archiving of high quality images.

Reevaluating Google is the best theory

I was thinking about looking at other services that I could try to see if they were any better than the Google services that I'm using at the moment when I came upon a post by Everton who was writing about the same thing at this blog. His main domain received a major Pagerank decrease from 6 to 3 and this made him realize that it is probably the time to move on and look for services that do it better than Google.

The so called Flickr Related Tag Browser offers an interesting and comfortable way to search Flickr using tags. The user enters a tag of his choice and the website compiles the relevant information and pictures from Flickr. 25 of the pictures are shown as tiny thumbnails which increase in size if the user moves the mouse over any of them.

Some images at Flickr are weakly protected with an image overlay called spaceball.gif. Whenever you right-click the image to save it you do save spaceball.gif instead which is a 1x1 pixel image showing nothing at all. The same happens if you try to drag the image to your desktop or hard drive. 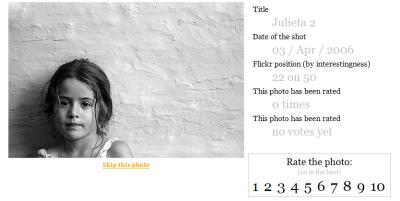 A collection of the best photos published on Flickr in 2006 with an option to vote for all of them in a voting process that reminds me of those hot or not type of sites.

Your first option is to take a look at how the photos have been rated by other users. Please be aware that all of the photos on the site are the best of 2006 and that the rating on this external site is only a rating of good photos. It can happen that a photo gets only 1 point which means that is is bad considered to a photo with a higher rating but still great if you consider all photos on Flickr for this year.

It seems that the big three, that is Google, Yahoo and Microsoft, always have to compete against each other. When someone introduces a new feature the others are surely going to announce a similar feature that is just a tad better than the feature of the other company. We are witnessing the race for Email storage at the moment. Microsoft has a storage limit of 2 Gigabytes for their users while Google has currently a limit of 2,8 Gigabytes. Yahoo decided to accept the challenge and give the others something to choke on, they announced today that they will offer unlimited Email storage to all of its users in the near future.

Yahoo bought a site I never heard about

Ever heard about Bix ? Bix.com to be precise. Don't be ashamed to admit that you never heard about it either. I read about the site today and decided to pay a visit to website I never heard about before. I always thought I know everything that is going on but it seems that some sites seem to slip through my grasps. Back to Bix: Bix is a contest site that seems to be pretty famous for it's Karaoke contests.

10 Widgets I can't live without

Widgets are small programs that add their small windows to your desktop and can be used from there. Widgets come in all colors and forms and you could categorize them the following way:

To get Yahoo Mail Beta, just switch your content preference to Germany, Frence or UK. Then you will be asked if you want to join the beta when you log into your Yahoo Mail. Say yes, and join the beta. Then from the options menu, change your content preference what it was before. Then go to Yahoo Mail again. You should still see Yahoo Beta. If you donâ€™t see it, go to options and click â€œTry Betaï¿½? button. Thatâ€™s all.

Flickr.com is a online photo service that allows users to upload, download, view and share pictures. One bad thing about it is that flickr itself does not offer a option to view or download more than one image at a time.