Anyone using the Flickr photo hosting website here? Flickr just announced an update to the service's photo uploader that is improving things significantly for Flickr users from all over the globe. Probably the biggest change is the improvement when it comes to photo uploading speed, which according to Denise Leung can increase the upload speed by up to 60% for international Flickr users. The speed increase on average is said to be between the 20% to 30% mark.

With the new uploader comes a photo file size limit increase. Free Flickr account owners can now upload photos with a size of up to 30 Megabytes, while professional users photos up to 50 Megabytes in size. That's more than Google Picasa's upload limit of 20 Megabytes per photo, and Facebook's 720 pixel display size limitation.

This one the other hand means that free Flickr users may reach the account's upload limit of 300 Megabytes per month after uploading ten photos to the hosting service. 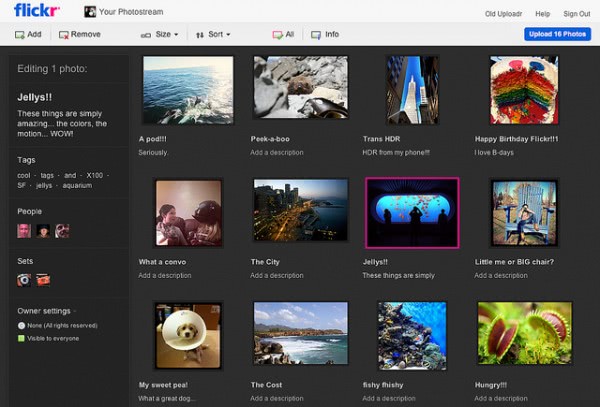 The new uploader supports the dragging and dropping of photos into the browser window to upload them from the desktop to Flickr. Images can also be rearranged via drag and drop in the interface as preview thumbnails are now shown. The new uploader finally supports zooming, rotating and sorting of photos, improving the uploading process further.

As you can see on the screenshot above, it is now also possible to add descriptions, titles and tags to photos before a photo set or individual photos get posted to the Flickr account.

The new HTML5 uploader is only compatible with Firefox 8, Safari 5, or Chrome 6 or newer. It currently does not support Microsoft's Internet Explorer or Opera, with support for IE coming in the future. Flickr will automatically load the Flash uploader if an unsupported web browser is used to upload photos to the site.

Flickr will roll out the new photo uploader to all users over the next couple of weeks.