Bittorrent Inc, which was recently sold, has launched the first public version of uTorrent Web, a web-based torrent client optimized for streaming media.

While uTorrent is under heavy criticism ever since Bittorrent Inc began integrating adware, offers, advertisement and other unwanted things in the client, it is up to this day a very popular client for seeding and downloading torrent files.

Today, the final version of uTorrent Web that has been released for Windows. The company promises that a Mac version will follow soon; reason enough to take another look at the application.

Attention: Reports suggest that the Windows installer may include third-party offers for installation.  I ran the installer twice on two different machines and did not get any. The offers may be limited to certain regions in the world or limited in other ways. 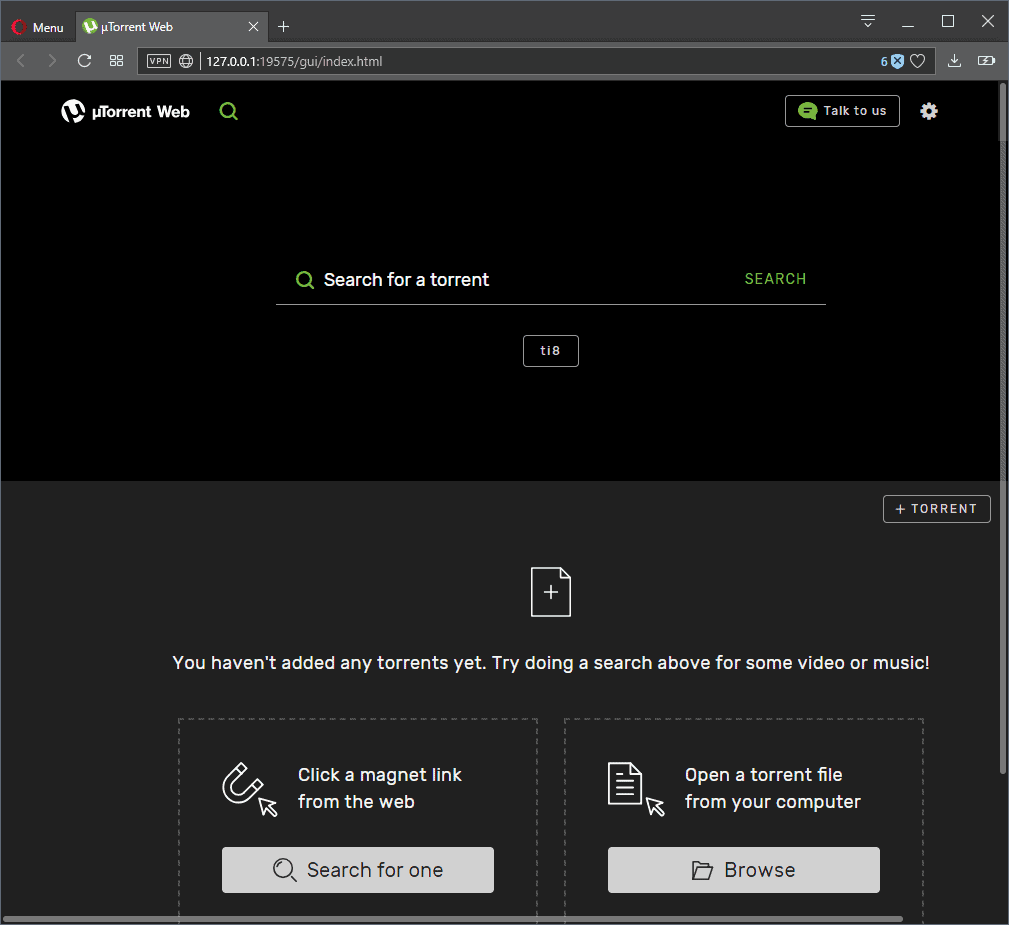 The uTorrent Web client runs on the local system after installation but all management options have been moved to the browser.

The interface should open automatically in the default browser on launch; if that is not the case you may click on the uTorrent Web icon in the System Tray area on Windows to launch it.

The main interface displays search functionality at the top and below that options to add torrents or magnet links to uTorrent Web.

Search is more or less useless at this point in time as it just redirects to a Google Search. If you search for EXAMPLE, search redirects to the search results page for EXAMPLE torrent on Google.

Adding torrents is quite easy. You may drag and drop torrent files to add them to uTorrent Web or use the "add" button to add magnet or torrent links instead.

Downloads start as soon as you have added a new torrent or magnet link and uTorrent Web switches to its media view which gives you options to play the first video of a torrent right then and there. 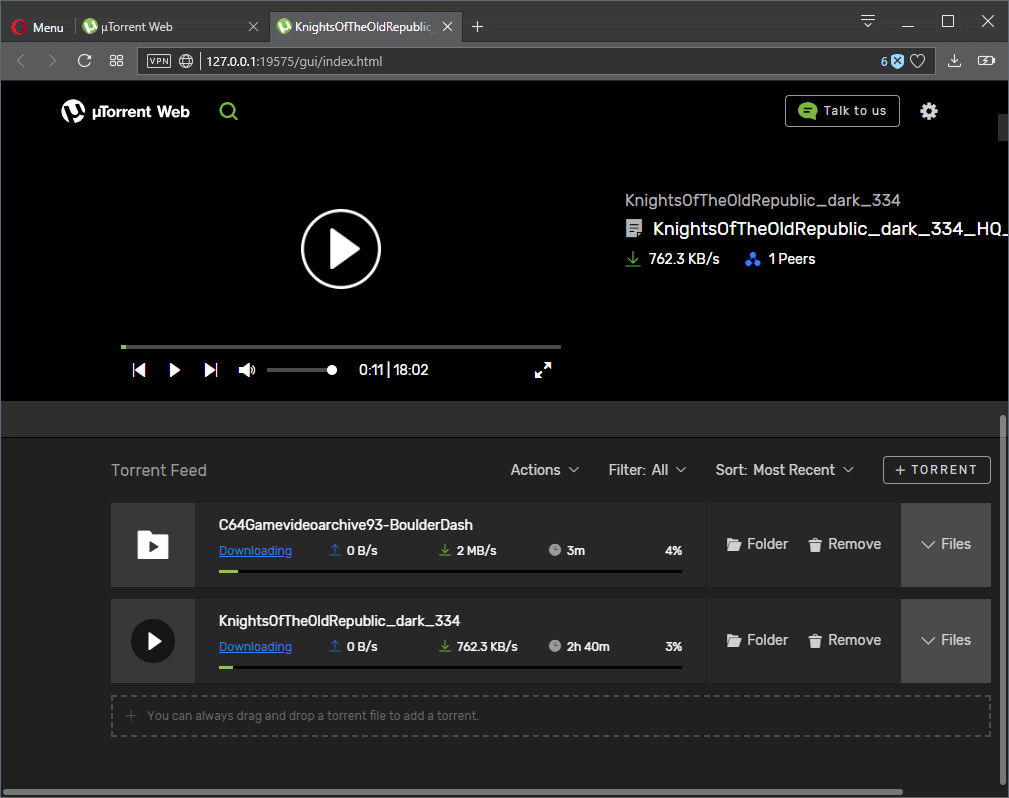 The media player has limited playback capabilities. Mp4 video files worked fine for the most part but I got only audio or no playback at all for other video formats.

The downloading happens in the background and it worked fine out of the box. Users should not expect a wealth of configuration options at this point in time though. In fact, the only download related options right now are to limit the upload and download bandwidth in the settings.

uTorrent Web plays the first media file it encounters by default. You may click on the files button next to a torrent to display all files it contains. From there it is just a matter of selecting a different file or format to play it. 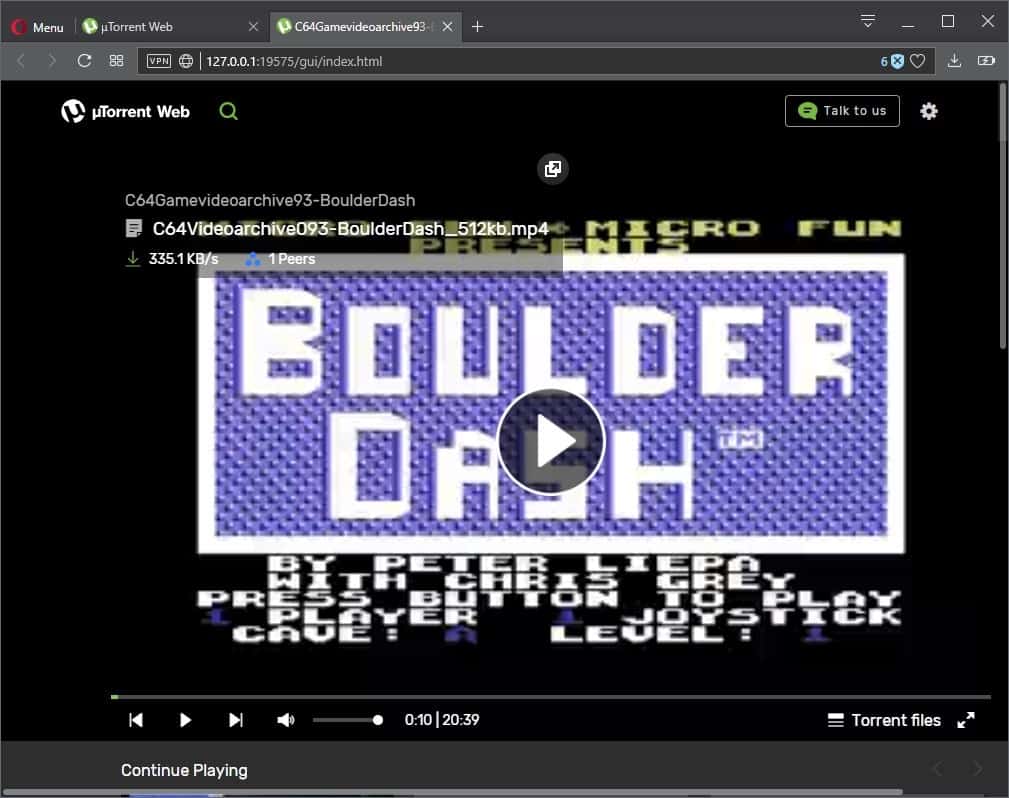 Whether it is possible to play the video file right away depends largely on the device's download speed and the seeders of the torrent.

Included media files played nearly instantly in some cases but they may not do so in others.

Files included in a torrent get downloaded to the local system so that you may play them locally at any time as well; this is useful for files that uTorrent Web's player can't play.

Note that uTorrent Web limits downloads to media files currently. The application did download avi, mp4, or ogv files included in a torrent but did not download xml or gif files. You need to click on files and toggle the download switch for excluded files to have them downloaded as well and you may use the feature to block files from being downloaded.

A setting to always download all files is not available. Basic torrent management options are provided by the web client. You can open the local folder of the torrent or remove the torrent from the local system.

The client supports sort and filter options, and you may pause, stop, or force downloads using the action menu.

uTorrent Web works surprising well. The main thing the application has going for it right now is that it is super simple to use and that users can start to stream media files included in torrents shortly after they have added the torrent to the download queue.

There are downsides, however: the media player lacks support for many common media formats and options to customize the application are scarce.

May not be a problem for some users but most probably like more control over the torrent client.

Now You: What is your take on uTorrent Web?