An update to the popular torrent download client uTorrent has been released a few days ago, bringing the version of the stable client build to uTorrent 3.1.3. As you may know, it is possible to update the client with the built-in updater, or by downloading the latest version of the software from the official website to run the installer manually instead.

Up until very recently, uTorrent updates would simply install the latest version of the client in a fast and convenient process that required no user interaction whatsoever.  Reports that the situation has changed appeared a few days ago with the recent update to uTorrent 3.1.3. Users who upgrade to that version will see a prompt during the installation of the update that may look similar to the one seen on the screenshot below. 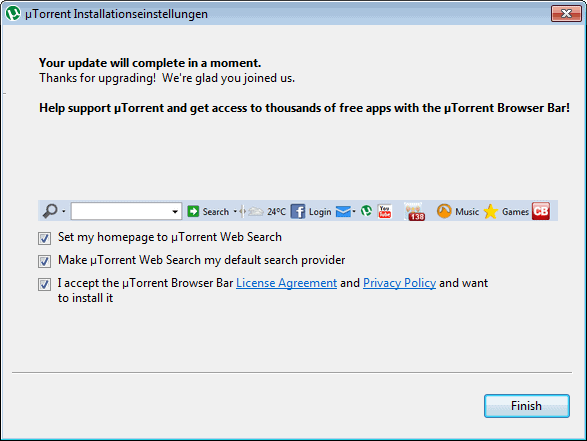 It reads: Your update will complete in a moment. Thanks for upgrading! We're glad you joined us. Help support uTorrent and get access to thousands of free apps with the uTorrent Browser Bar!.

Below that is an image of the browser toolbar, and three checkboxes:

Users who simply click Finish will install the uTorrent toolbar, and change the homepage and the default search provider for all installed web browsers on the system to uTorrent web search.

One could now say that it is the fault of the user if those changes are made to the system, as the dialog is giving users the option to disable those selections to avoid installing those, usually unwanted, features. Then again, it is a big change in the way uTorrent updates are processed on client machines. Users did not have to pay attention to updates up until now, because it was simply not required to do so.  With uTorrent 3.1.3 comes the requirement to pay attention to all dialogs presented on the screen during the upgrade, to avoid installing adware or unwanted software on the system.

The release log on the uTorrent website does not mention the bundling at all. If you think that is going to far, you should take a look at the uTorrent alternative qBittorrent.

Bundling updates, even automatic ones with third party software is not as common yet as bundling adware with software installers. It is however likely that we will see more programs utilize this possibility in the future.