You are here: Home > Email > Gmail

Gmail users until now had the choice to use http or https when connecting to the Gmail web service. Http offered performance advantages while https made up for it with an increase […] 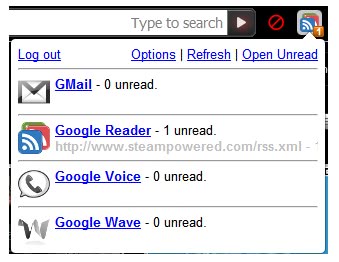 A long requested feature of many Gmail users has been finally added to the popular webmail service. Gmail users can now merge duplicate contacts automatically, something that was not possible before. The […]

Have you ever asked yourself how you did end up with the email account that you are currently using? Chance is that you have at least one account at one of the […]

If you visit your Google Mail account you can look at the footer of the mail service's homepage to see how many free space is still available for that account. The current […]

Update: Extensions are now integrated fully in Google Chrome. This makes it easier to install them, and use them in the web browser. The extension development for the Google Chrome browser is […]

Gmail at your fingertips on the Linux desktop

When Gmail first came out I wasn't a fan. But after a year of use I have found Google Mail to be a very valuable tool. Because I use Gmail mostly for […]

The official Gmail blog has published five security tips to improve the security of a Gmail account. Email security should be one of the top priorities for a number of reasons but […]

It is usually not that hard to access the Gmail login page. Most users simply need to point their web browser at the standard Gmail address to access their email accounts. But, […]

It is not that easy to check multiple Gmail accounts regularly. Gmail itself only allows one login per user. There are a handful of ways to circumvent that. Probably the most popular […]

Google Voice is a relatively new Google service that can probably be best described as the hub for all phone numbers a user, family or company uses. The main benefit of a […]

Google Calendar is an online calendar that can be used to keep track of events and important dates. The calendar application can be integrated into various Google services including Gmail which is […]

Gmail Tasks Can Now Be Emailed

Gmail Tasks has been moved from the labs section of Gmail to the main service a while ago. It offers basic task list management in the Gmail interface. Gmail users can use […]

Gmail Enables Mail And Contact Import For All Gmail Accounts

The option to import mail and contacts from other email accounts into a newly created Gmail account was enabled a few month ago. Long time Gmail users on the other hand were […]

Set up Claws Mail to work with Gmail

"Once more unto the breach my dear friends, once more!" I've written about Claws Mail quite a bit (see â€œClaws Mail: The unsung powerhouse email clientâ€œ, â€œClaws Mail must have pluginsâ€œ, â€œCreate […]

One cannot really say that Google is not working hard to make Gmail a better service. They started to introduce many features in the online email client lately that would not only […]

Phishing is still one of the biggest security threats that users face on the Internet.Â  The term refers to attempts to steal account passwords by impersonating other organizations or users. Criminals send […]

Many Firefox users do not know that they can change the default email client in the web browser easily. What even fewer know is that it is even possible to not only […]

Secure your Google account with your mobile phone number

Update: The attachment limit is still 25 Megabyte on Gmail but Google has added an option to the email client to use its cloud hosting service Google Drive for larger attachments. Instead […]

I received several emails lately in which I was asked to explain how to set up email clients correctly so that they would connect to Gmail using Pop3. The POP3 configuration of […]

You might stumble upon a torrent or nzb file that you want to download without the ability to do so right away because you are not at your computer system. Maybe you […]

Gmail Translations: Who Needs It?

A new feature was recently introduced on Gmail that may be enabled by users to translate email messages automatically on Gmail. Update: The feature has since then been integrated into Gmail. It […]

One of the things that many users like about Google's email service Gmail is that Google improves the service constantly by adding new functionality to it. Users get to test tools published […]

There are basically two ways to log into Gmail. Either by using the Gmail web interface that is available for most users at gmail.com or by accessing Gmail remotely using desktop or […]

Update: The program has not been updated for a long while and it is unclear if it is still working properly. A far better option is to configure Gmail to use IMAP, […]

It seems like I'm the resident Google Labs reporter here at gHacks, but truth be told, they have been rolling out some cool features! The development team's latest is the ability to […]

Sharing is easy with Gmail!

Since the introduction of the Gmail Labs settings to all users sharing in emails has been much easier, and I think somewhat overlooked. There are a few things you can do to […]

The article looks at Gmail's recipient suggestion functionality which was first available as a Labs project, but has been integrated natively now. It seems that Gmail is set to read your mind; […]

Update: Note that the program has been last updated in 2009. While it may still work, it is advised to use a program that is updated regularly. One of the programs you […]

Update: Please note that Mail Goggles is no longer provided by Google. It has been removed from the Labs section on Gmail. The closest experiment that you may want to enable instead […]

Gmail: 90 Tools And Tips To Make You A Gmail Pro

Gmail (Google Mail) is without doubt one of the most popular online email services. What makes it so interesting is the functionality that it provides out of the box, but also the […]

News about domain hijackings came to light in the last weeks. The commonality was that all victims were using Google Mail as the primary email address of their websites. Yesterday a proof […]