News about domain hijackings came to light in the last weeks. The commonality was that all victims were using Google Mail as the primary email address of their websites. Yesterday a proof […]

Joeâ€™s post today was about the importance of backing up your blog, and itâ€™s something which I now realize can never be taken too seriously - only this week another website I […]

Even if you use an online service such as Gmail exclusively to manage your emails, you may want to back up your emails regularly to a local storage device. The reason here […]

How To Setup Gmail In External Mail Clients Properly

Everton from Connected Internet send me an initiation to a new Google Apps account for our news site Windows 7 News. It basically has been created so that I can access mails […]

Synchronize Contacts Between Thunderbird And Gmail

You might have already read elsewhere that it is possible to reveal the real name of any Gmail user by sharing a calendar in Google Calendar with him. Let me explain how […]

As I read a large selection of RSS feeds each day I see a whole lot of great little tech tips coming through, and often I want to share them, but that […]

Gmail Labs quicklinks to find anything in a flash

Gmail Quick Links is a new feature rolled out in Google Labs for Gmail which enables you to create some links for frequents searches, but it can be used for much more. […]

The award for the longest title ever could go to this one. But it's good news actually. Both Email services are "supporting email authentication standards including DomainKeys and DomainKeys Identified Mail (DKIM) […]

Google Mail introduced a new feature recently that can be helpful in finding out if someone else has or had access to your Gmail account. The function is a bit hidden in […]

I already covered how one can make Gmail the default Firefox 3 mail client which has the effect that mailto links are opened on the Gmail website from that moment on. This […]

The popular â€˜Better Gmail 2â€™ Firefox extension adds a whole lot of great extra functionality to Gmail through various Greasemonkey scripts. What I loved the most was the inclusion of the fantastic […]

Gabtastic provides desktop access to the chat applications Facebook Chat and Google Talk. Those two are normally only accessible on the Facebook and Google Mail websites which require a permanently opened browser […]

Google has added a very interesting feature to Gmail called Labs which is accessible in the account options. Labs is basically a testing ground for Gmail add-ons created by members of the […]

A new version of Gmail was introduced a while ago by Google which added several new features, like color labels, to Gmail. So called Gmail 2 is accessible through a link in […]

Google likes basic designs that just work. Take a look at their search engine or Gmail to know what I mean. Now you all know that I do not have a problem […]

What would you do if you had purchased a software that would archive your Gmail mails and found out that this software send your username and password to the Gmail account of the author of the software ? That's apparently what has happened to users who purchased the program G-Archiver by someone named John Terry.

I read about this tip yesterday at Digital Inspiration and when I woke up today I saw that Lifehacker wrote about it as well. The tip mainly stated that users who signed up for Gmail would not get one but two mail addresses: [email protected] and [email protected] The suggestion was to give on out to friends and use the other for all the other signups and conversations on the Internet.

Pimp out your Google with the iGoogle Bar

I just found a great Firefox extension while browsing Lifehacker, a small addon that will add a bar in place of the default, quite unuseful bar, and let you access features in […]

Let me narrate a story to you. A story of someone who has an Gmail account and a domain registered to his name. This someone checks his Gmail account regularly and visits other sites afterwards. It is so convenient to stay logged in at Gmail in case you want to check again. Maybe Gmail is open all the time in another tab for even further comfort.

Internet on the go

The problem with the net is that there isn't a sure-fire way to ensure that you will actually have access to it anywhere. If you have Wi-fi you are quite well of, but of course only near cities and towns. Even then, if you find hotspots you're fine, but otherwise no internet for you.

If you use Firebug and visit Gmail you receive a message "Firebug is known to make Google Mail slow unless it is configured correctly" which was not known by me. Google suggests to disable Firebug for the Google domain completely which should not be a huge problem normally.

Use Gmail as a drive in Windows

Google increased the storage limit for Gmail users just recently who have now roughly four Gigabytes at their disposal with the option to add even more storage that can be purchased in the account settings. The maximum amount is currently 400 Gigabytes of storage which would cost $500 per year.

You can bet that every tiny bit of new information about Google or one of their services will make headline news in a matter of minutes after it was discovered or announced. This time it was the discovery that the maximum attachment size for emails on gmail has been raised to 20 Megabytes.

While a 100% increase may seem nice it raises some questions about the usefulness of such an increase. Many mail servers will not accept emails of that size and bounce them back. It should also be noted that emails were never supposed to be used for large file transfers in the first place. 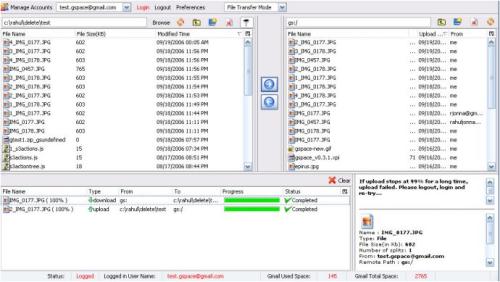 I took a quick look at the Gspace extension for Firefox in 2005 and it happened so much that I thought it was a good idea to take another look at it. Gmail gives its users lots of space, currently about 2.8 gigabytes of it which is of course to much for most mail accounts and this is where the Gspace extension for Firefox steps in. It basically makes it possible to use gmail storage in a way to store files online which seems a lot securer in my opinion than using a file hoster. The interface looks similar to most ftp clients out there, it should not be a problem getting used to gspace quickly.

We had some reports coming in about some outages of the gmail - that is google mail - web interface which meant that some users could not access their mail accounts for several hours which seems to be a big problem for at least some of those users. In the time where customers for instance demand a fast, almost immediate, reaction to their emails it could become a matter of survival to receive and react to the mail.

There have been two drastic changes to Googles Gmail service in the last week. The first will probably make most users happy, gmail is not available to everyone. That is right, no more begging for invites, just visit the gmail site and signup for an account if you need one.

Back Up Your Gmail emails

Recently some news emerged on the internet that some gmail users lost some or even all of their mails that have been in that account. There is no obvious way to backup the mail that exists in your gmail account. You could probably forward the important mail to another account but this solution is not really that practicable.

You might want to import already received mails into your gmail account, one reason could be that you want to make the complete switch to gmail and never use the old email client again. There is unfortunately no import function to do that in gmail, at least none that I was able to find in my gmail account.

The title could be a bit misleading, GTDGmail is a firefox extension that adds additional functionality to your gmail account. Getting Things Done is a productivity concept that aids you in organising your tasks: "a person needs to move tasks out of their mind and get them recorded somewhere. That way, the mind is freed from the job of remembering everything that needs to be done, and can concentrate fully on actually performing those tasks"

GMail Drive is a Shell Namespace Extension that creates a virtual filesystem around your Google Gmail account, allowing you to use Gmail as a storage medium.

A lot of my visitors already have a google gmail account or are asking me for an invitation. I thought it would be nice to share a great site that features lots of gmail tips with you. The site gmail tips the complete collection gives a rough introduction to the google mail service and lists more than 40 tips afterwards. For example tip 27 explains to you how you would add a hotmail email to gmail, tip 11 tells you how to connect securely to gmail.

You probably wondered why google is giving you two gigabytes of space for your gmail account. The reason could be pretty simply, no one will ever use those two gigs anyway. Even if you recieve lots of emails including attachments youÂ´d need years to fill the space.

Some clever folks came up with an idea on how to use the empty space of your google account. The answer: Use it as online storage..