Google Voice is a relatively new Google service that can probably be best described as the hub for all phone numbers a user, family or company uses.

The main benefit of a single-number approach is that callers will not have to think about which number to call to reach a person as it does not matter where the person is right now as the number will always be the right one provided everything is set up correctly.

Google Voice users have access to lots of interesting features like redirecting numbers to specific phones, voicemail, transcripts and email notifications as soon as a message was recorded.

Gmail users did receive notifications of missed calls previously with options to see who called, read the transcript of the message or visit a new page to listen to the message left by the caller.

This has now been changed by Google to make things more comfortable. It is now possible to directly play the missed messages in Gmail. The new feature needs to be enabled in the labs section of Gmail. Locate the Google Voice player from the Gmail Labs tab under Settings and enable it.

The easiest way to do that is to load https://mail.google.com/mail/u/0/?pli=1#settings/labs in your web browser of choice and locate the "Google Voice player in mail" widget on the page.

Simply switch it to enable on the page, scroll down to the bottom of the page and click on save changes. 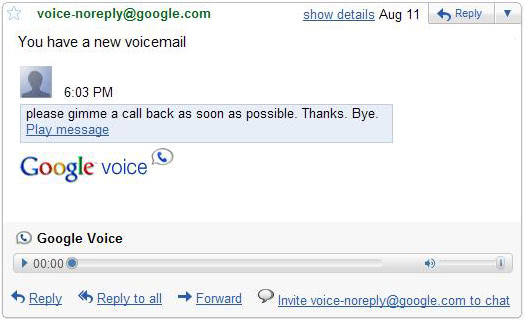