The free software program Gmail Notifier is technically a desktop program that can check multiple Gmail accounts for new messages. It uses IMAP over SSL for the connection and can monitor up to five Gmail accounts whenever it is running. 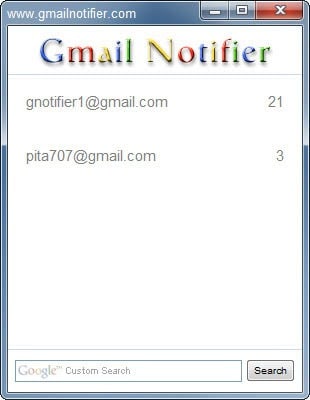 Gmail Notifier furthermore offers the option to read the header and body of new messages unlike many other Gmail notifiers that only notify the user of new emails. The program will display a message count for every Gmail account that has been added and configured in the software program.

Emails can be marked as read or deleted as well and attachments are indicated to the user. Notifications are in place to inform the user when new emails have arrived in one of the accounts that are monitored by Gmail Notifier. It is possible to switch to the Gmail account immediately by holding the Ctrl key and clicking on the account. This will open the Gmail interface of the selected account in the default web browser.

Gmail Notifier should be compatible with most versions of Microsoft Windows. It was tested on a Windows XP SP3 test system.

Update: Gmail Notifier has been updated by the developer to work with Windows Vista and Windows 7 as well. The program has been localized into languages such as German, Spanish, French and Italian. The program checks every 2 minutes for new mails in all connected Gmail accounts, with the option to check manually at any time with a right-click on the application's system tray icon.