How To Use Gmails Email Translate Feature

Automatic email translations have been available on Google Mail for some time as parts of Gmail Labs. Users who have activated the feature in their account, were able to make use of […]

Google's file hosting and synchronization service Google Drive is here, at least for some users as the service seems to be rolling out gradually right now. The Google Drive homepage is live, […]

Gmail Reports Why Mails Have Been Rated As Spam

Like many other email providers, Gmail is using anti-spam technologies to filter out spam messages automatically. These spam messages are then moved into the spam folder, and not into the mail inbox. […]

Spam is one of those things that you never can get rid of completely, it seems. Email providers like Hotmail, Google Mail or Yahoo Mail are battling on the spam front ever […]

Microsoft's Guide For Gmail Users To Switch To Hotmail

Google recently revealed the plan to merge the privacy policies and terms of service for most of the company's products. This move gives all Google services direct access to all user data. […]

Larry Page, the new CEO of Google, continues to retire Google services (check out Google retires Google Buzz for additional information about previous retirement waves). This time a set of not overly-popular […]

Google accidentally (or maybe not) published a video on the company's official YouTube video channel that introduced the new Gmail interface. The video has been set to private shortly thereafter but viewers […]

If you have a Google account you can chat with your contacts, for instance over on the Gmail homepage. This web based chat works pretty much like a standard instant messenger chat. […] 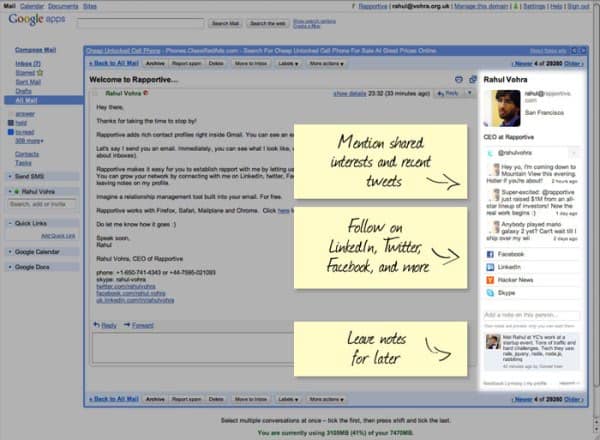 When you read or reply to emails on Google's mail service Gmail, you see the email addresses and contact names of the recipients and senders. But that's it. Sometimes you may want […]

Migrate Your Email Between Providers

Update: TrueSwitch has shut down as of May 15, 2013. Several email providers provide you with options nowadays to migrate an email account to them. This is for instance the case for […]

I held back on reviewing Pokki for a long time. That was probably not the best of ideas considering that it is one of those rare gems that you stumble upon from […]

I have to admit that I barely use the Google Mail web interface, as I'm handling all emails in the Thunderbird desktop email client. Sometimes however I have to open the Gmail […]

Microsoft introduces us to the Gmail man

It's very common for the major technology companies to release video adverts for their products that deride or poke fun at the competition, probably the best example of theseÂ are Apple's excellent parodies […]

I remember reading about attackers a while ago that broke into Gmail accounts of webmasters. Instead of doing all kinds of things there they simply added mail forwarding filters to the account. […]

Millions of emails fly through cyberspace daily, and as is the case for many users, it can be useful to identify the location that the e-mail originated from. Sometimes it is best […]

Stunnel - How to use Gmail With Older Software

With over 200 million users, Google Mail, or Gmail, is one of the most used email systems in the world today. Even companies are getting in on the act by moving their […]

When I was working in tech support for a large German financial corporation I regularly had to deal with support requests by customers who received phishing emails. It took a lot to […]

Web companies like Google, WordPress or Facebook are suddenly realizing that old web browsers may have a serious impact on the support they offer. While everyone applauds the companies for dropping support […]

Gmail, like any other modern email service, supports file attachments that are then send with the email to the recipient of the email. File attachments need to be uploaded and match certain […]

How To Send An Executable File Via Gmail

Up until today I have never tried to send an executable file via Google's email service. When I tried that today, it looked at first as if it was not a problem. […]

One of the annoying aspects of web mail accounts is that you cannot navigate away from a page after you have initiated an action. This includes uploading larger attachments or sending emails. […]

Roman messaged me yesterday about a problem one of his friend's was experiencing. His friend's Gmail account was more or less at the storage size limit which meant that the friend either […]

I have more than 1000 contacts in Google Mail, all people that I know and hold dear. Just kidding. Everyone, and I mean every single person who send you an email in […]

Cloud based email is great. Providers such as Gmail, Hotmail or Yahoo Mail offer web access to their email services that allow users to access their emails from everywhere, provided that they […]

If you can't log into your Gmail account this morning it could be because engineers at Google are trying to recover all your emails that they accidentally deleted last night. Some estimates […]

If you've used Linux long enough, you know there are some seriously cool tricks you can pull from the command line. Some of these tricks are just for fun, but the vast […]

Lets say you have used the Mozilla Thunderbird client for some time and have decided to move to the cloud, more precisely to Gmail or Google Mail. Question is, how do you […]

Gmail is a free ad-supported web-mail service supporting both POP3 and IMAP4 email protocols. It is provided by Google, the company that runs the search engine website of the same name. Gmail […]

There are two to tango, and the same is true for an effective online security strategy. What does it mean? On the one side, the company offering a service needs to make […]

Google Multi Account Logins, What You Need To Know

Up until now, if you had two or even more Gmail accounts, you had to log out of one account first to access another one. This was in fact true for Google […]

Google back in March introduced a warning system in Gmail that would notify Gmail users about suspicious account activity. From what we could tell back then the system compared IP addresses of […]

The web mail war is raging on with the continued roll out of Microsoft's new Hotmail service.Â  Now Google is coming back with new features to it's own GMail service, the first […]

Is it gmail.com or googlemail.com? The answer to this question depends on the country that you are living in and when you have registered a Google Mail account. Most users who signed […]

Email @gmail.com Is No longer Verified By Google

Webmasters who log into Google Webmaster Tools might notice a new notification message on top that reads "[email protected] is no longer verified by Google. Please verify the address or select a different […]

Back In January Google revealed information about a cyber attack that had been carried out against the company. The information released at that time was scarce but the impact was huge as […]

The Google Chrome browser and its open source counterpart Chromium do not have options currently to configure default programs. Firefox, Opera and Internet Explorer ship with configuration options to set default programs […]

Netbooks usually run at limited screen resolutions which often fail to display websites and services properly. And those that are displayed properly still need to be scrolled so that all of the […]