Google back in April 2013 changed the Gmail compose interface in a significant matter. Instead of opening it in its own page on the Gmail website, it now opened as a small window attached as an overlay on the page you were on. The window was a lot smaller, and while there have been options to enlarge it or center it on the screen, it was still disliked by Gmail users who wanted the old interface back.

This was possible for some time, as Google displayed an option to return to the old compose interface on the Gmail website. Eventually though, the company removed the link leaving users with nothing but the new interface to compose emails on.

Update: We have removed the link to the extension as it is no longer working correctly. You can try an extension like Gmail Classic/Old Theme instead.

Old Compose is a Google Chrome extension that restores the old interface on Gmail.

Note: The extension is not listed in the Chrome Web store, and the developers of it have put in place several hurdles that you have to jump over before you can download it. They require you to enter an email address first, and then make a post on Twitter or Facebook about it, before you get access to the download. Someone did however upload the latest version of the Old Compose extension here, so that you can download it directly.

To install Old Compose in Google Chrome, click on the settings button in the main toolbar and select Tools > Extensions from the options. You can alternatively load chrome://extensions/ directly.

Drag and drop the downloaded file to the page to get the installation dialog and install it in the browser.

The developer has created an instructional video that walks you through the installation.

When you visit Gmail afterwards and click on compose there on the page, you will notice that the compose interface opens up like it did before Google made the change.

If you want Gmail's old compose window back, this is your chance to to do. While limited to Chrome, it is the best solution so far to achieve just that.

There are a couple of things to not like about the extension and they are all linked to how it is offered and distributed. First, it is not offered in the official Chrome store which may raise some alarm bells as it has not been checked for security issues or malicious contents.

Second, forcing users to provide the makers with an email address and to make a post on Twitter or FacebookÂ  before they can download and install the extension makes it look like an email harvesting and link bait extension more than anything else. 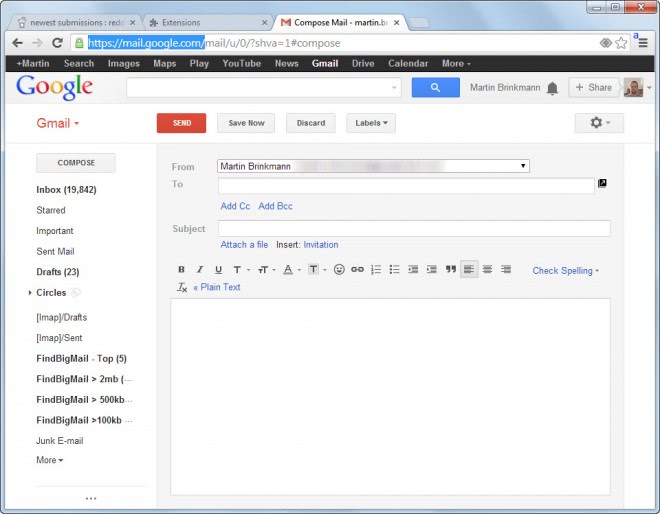 These phishing email subjects get the most clicks