How to add a custom photo background to Gmail

Gmail back in 2008 launched a themes engine that allowed users of the service's web client to change the black and white design of the site to something that at times looked like a homepage from the 90s. Especially the themes that are now listed as classic themes in the interface fell into that category, while the plain color themes offered a professional looking design that changed the color scheme of the site but kept the backgrounds mostly in plain colors. 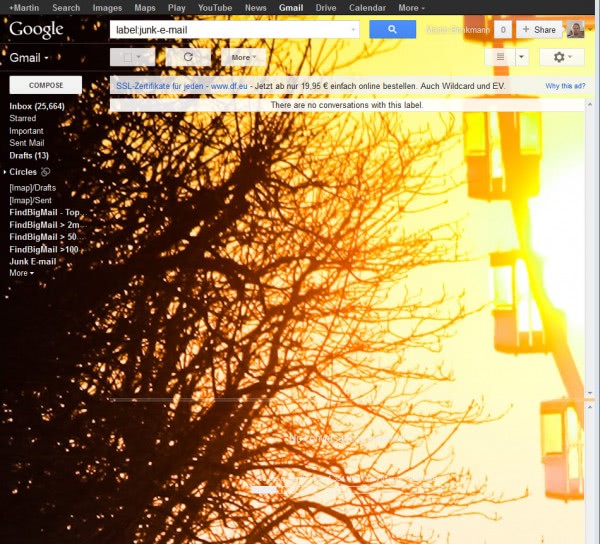 Open the Gmail homepage and locate the settings icon at the top right. It should sit right underneath your profile photo on the page. Select the themes context menu item here to open the themes selection directly. Here you see all existing themes, and the new custom themes entry. Google has made available a light and dark theme template, which define how the background colors look like on the site.

Once you click on light or dark, a selection window opens that gives you several options to pick a custom photo background for your Gmail inbox. Google makes available featured images that you can select or use, your own photos that you have uploaded to other Google services such as Google+ or Picasa, photos from your phone or computer, from a web address, or photos that you have recently selected.

Once you have added a custom theme to Gmail, you can switch between light and dark styles directly in the interface. If you want to change the photo, you need to click on change your background image instead which opens the configuration menu anew.

I encountered a few issues when I tried to add bright photos as a theme, as they made several Gmail menus barely readable. This is a big issue, and it can generally be said that darker images, at least in the upper half of the screen, work better than lighter images.

Custom themes will certainly appeal to part of Gmail's user base. I on the other hand won't be using themes on Gmail, first because I mainly access my mailbox using Thunderbird, and second because I think it is adding too much noise to the page.

What about you? Do you like the custom theme option on Gmail? (Thanks Michael for the tip)

Previous Post: « Hotmail's Redesign, Microsoft Goes all in on Metro
Next Post: « Mozilla: Thunderbird's not our priority anymore