Spam is one of those things that you never can get rid of completely, it seems. Email providers like Hotmail, Google Mail or Yahoo Mail are battling on the spam front ever since they opened their door for the first users. And while they managed to cut down significantly on spam in past years, there is still work to be done in that compartment. Providers are currently working together to eliminate most of the spam once and for all. Until then though, users will receive spam fairly regularly in their inboxes.

After some time, the ratio of spam to legitimate emails in the inbox, and not in the spam folder, were analyzed. All unsolicited emails that arrived in the inbox were countered as well.

Microsoft's Hotmail service managed to take the number one spot from Google in a very close finish, followed by Yahoo Mail and the unfiltered email account. 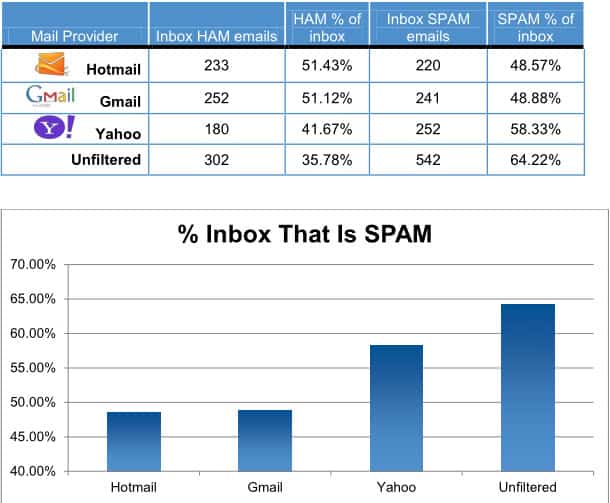 Yahoo Mail's inbox spam percentage was about 10% higher than that of both Hotmail and Gmail. The small difference between Gmail and Hotmail won't likely convince anyone to switch providers. It outlines however that Microsoft managed to improve Hotmail's spam fighting and detection capabilities over the years.

The study does not take into account factors that are beyond its reach. This includes if and how often websites where the email addresses were posted were crawled, or if some email accounts were sold more often than others. These may have influenced the results in one way or the other.

Microsoft was the first company to publish a response. The company attributes the drop in spam on Hotmail to several factors, including the company's SmartScreen technology that has reduced the spam ratio on a typical Hotmail inbox to below 3% according to Microsoft.

Do you have email accounts at one or multiple of the email providers? Do you receive less spam today than in the past?

Thunderbird 78.4.3 is out with a handful of fixes

Previous Post: « Microsoft: Attachments Suck, Use SkyDrive Instead
Next Post: Thunderbird to get Dropbox and File Hosting Integration »