Thunderbird 78.2.2 email client update is out

The Thunderbird email client team has released a new version of the program for all supported operating systems. Thunderbird 78.2.2 is a bug fix update for the most part but it introduces a new feature and changes as well.

The update is already available via the email client's automatic updating system. Thunderbird users may select Help > About Thunderbird to start a manual update query. The client will pick up the update then and install it on the system.

The new version is also available on the official Thunderbird project website. Just download it and run the installer to update the existing installation to the new version.

Note: Versions prior to 78.x won't be updated to the new version via automatic updates. A manual update is required to update. Thunderbird 78 introduced many changes to the email client, including support for MailExtensions. Classic extensions cannot be used anymore. 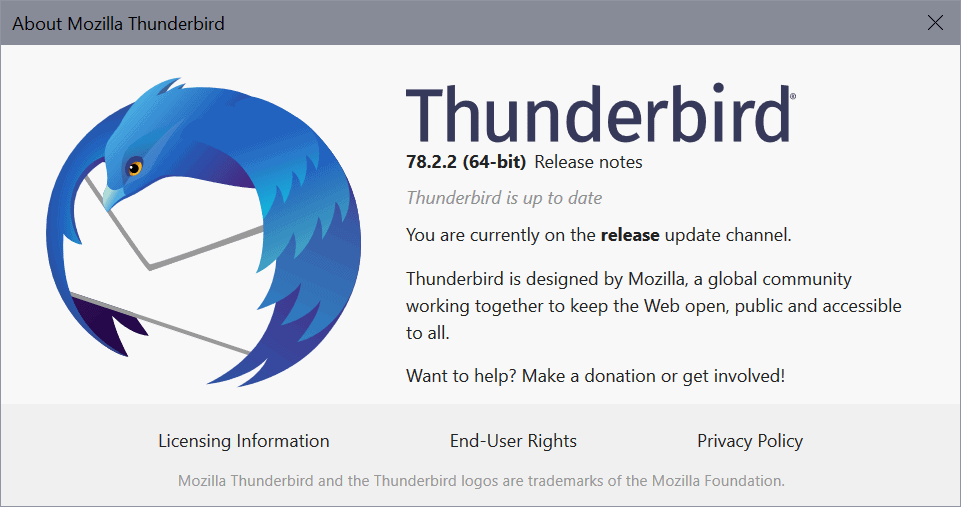 The first change becomes apparent right after the first start; Thunderbird opens the privacy policy in a new tab in the email client when it has been updated. The last update of the policy, at the time of writing, is August 30, 2020.

Twitter chat support has been removed completely in the new version. As far as fixes are concerned, many patch issues in the built-in OpenPGP functionality that has been enabled in the previous release version.

The "discover key online" feature is now working when you search using an email address, and decryption should work now as issues with certain "HTTP proxy configurations" has been addressed.

Other fixes in the new version include improvements to Windows 10 high-contrast theme setups, making event reminder details readable in the Calendar, and fixing an issue that caused the sending of messages to fail when recipients were in LDAP address books.

Martin Brinkmann is a journalist from Germany who founded Ghacks Technology News Back in 2005. He is passionate about all things tech and knows the Internet and computers like the back of his hand. You can follow Martin on Facebook or Twitter
View all posts by Martin Brinkmann →
Previous Post: « Thunderbird 78.2.1 is out with OpenPGP enabled
Next Post: Automatic Thunderbird upgrade to version 78.x has started »