Thunderbird 78.2.1 is out with OpenPGP enabled - gHacks Tech News
ghacks.net

Thunderbird 78.2.1 is out with OpenPGP enabled

The team that works on the Thunderbird email client has released Thunderbird 78.2.1 to the client's stable channel on August 29, 2020. Existing Thunderbird installations will be upgraded automatically to the new version provided that automatic updating functionality has not been turned off and that Thunderbird 78.x is installed.

As has been the case with previous Thunderbird 78 releases, installations that are still on Thunderbird 68.x won't be upgraded automatically. A manual update is required at this point in time to upgrade earlier versions of Thunderbird to the latest.

One of the reasons for blocking the update is that add-ons support changed significantly in Thunderbird 78. The email client supports MailExtensions only and that means that some extensions won't work anymore in the new version. 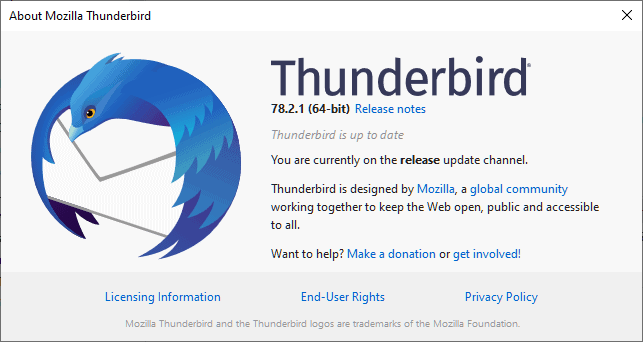 One of the big new features of Thunderbird 78 was support for PGP encryption baked into the client directly. Thunderbird users had to install extensions such as Enigmail to integrate PGP support. The release of Thunderbird 78 integrated OpenPGP support in the email client, but it was not enabled by default because of issues that still needed to be resolved.

The release of Thunderbird 78.2.1 enables OpenPGP support by default in Thunderbird. Thunderbird users may select Tools > OpenPGP Key Manager to get started. The window that opens displays available keys that have been generated previously or imported, and options to generate new keys that can then be used to encrypt email conversations.

A click on Generate > New Key Pair starts the process that is as simple as it gets. All it takes is to select one of the available email accounts and actiate "generate key" to start the generation. Options to change the three year expiration date and key type / size are provided as well. 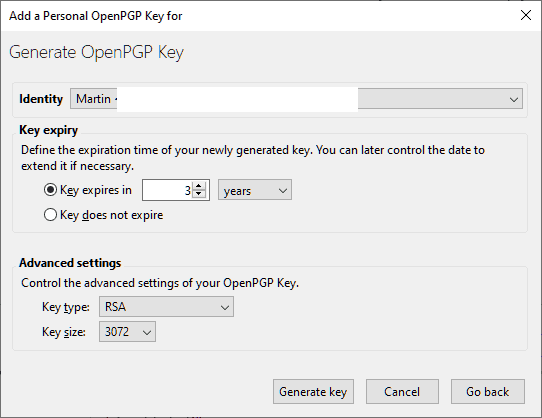 Key generation may take a few minutes according to the dialog that is presented to you after you activate the generate option. It took just two seconds on a test system though, mileage will vary depending on the computer's hardware and capabilities. 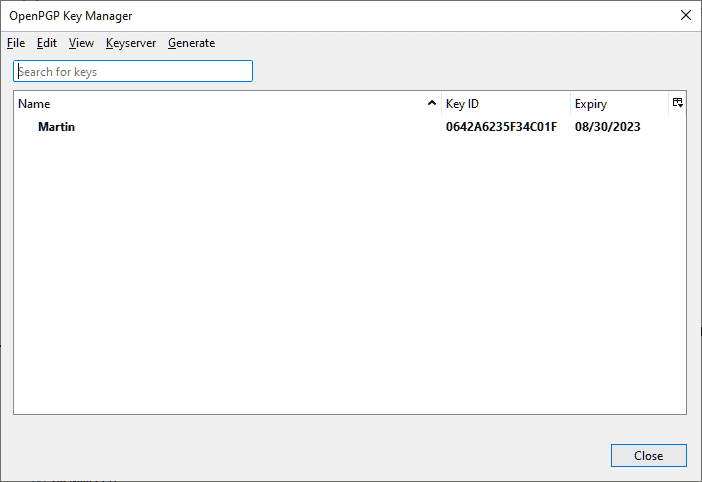 You may encrypt emails from that moment on when you use the email address. Just open the compose window in Thunderbird and select Options > Require Encryption. You need the public key of each recipient for that, and Thunderbird informs you if a key has not been provided yet.

The integration is straightforward and as simple as possible. Most users should not have any issues setting up keys to encrypt important emails. It is still necessary to exchange keys somehow, as it is not possible otherwise to encrypt emails.

Now You: Do you encrypt emails?

Article Name
Thunderbird 78.2.1 is out with OpenPGP enabled
Description
The team that works on the Thunderbird email client has released Thunderbird 78.2.1 to the client's stable channel on August 29, 2020.
Author
Martin Brinkmann
Publisher
Ghacks Technology News
Logo

Martin Brinkmann is a journalist from Germany who founded Ghacks Technology News Back in 2005. He is passionate about all things tech and knows the Internet and computers like the back of his hand. You can follow Martin on Facebook or Twitter
View all posts by Martin Brinkmann →
Previous Post: « Email Client Thunderbird 78.2.0 released
Next Post: Thunderbird 78.2.2 email client update is out »