Mail client Thunderbird 68.2.0 is out

Thunderbird 60.x installations without Lightning are not updated automatically to the new version at this point. It is still possible to upgrade but this needs to be done manually by downloading the Thunderbird installer from the official site and executing it on the local system.

Users who upgrade to a 64-bit version of Thunderbird from a 32-bit version should have fewer issues, if any, when they do so. The development team notes that it may still be necessary to pick the right profile as a new blank profile may be created. Affected users may either load Thunderbird with the -p parameter to display the profile selector on start, or open about:profiles from Help > Troubleshooting Information.

Note that Thunderbird 68 does not support all extensions that worked in previous versions of the email client. 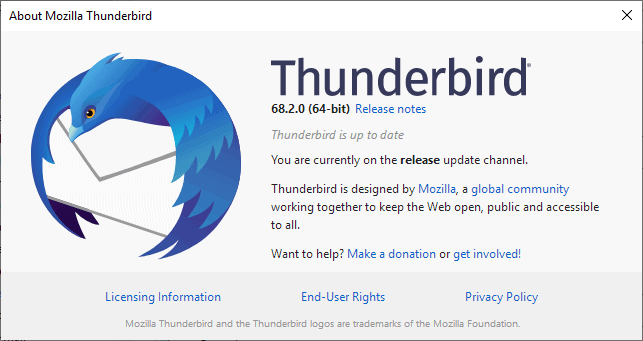 Thunderbird 68.2.0 is mostly a bug fix release. It does introduce support for the two WebExtensions APIs Message Display and Message Search but those are the only new additions to the email client.

The APIs were added to newer development versions of Thunderbird but backported to Thunderbird 68.2.0.

Improvements include a fix for Thunderbird not maintaining the application window size after a restart, mailing lists editing fixes, and better visual feedback for unread messages when the dark theme of the email client is used.

Previous Post: « Thunderbird to support OpenPGP encryption standard in 2020
Next Post: Manage your Todo.txt with Thunderbird using this extension »