Microsoft implemented native virtual desktop support in the company's Windows 10 operating system that allows users to use multiple virtual desktops to divide programs on to them.

The feature is not entirely new though, not even on Windows, as Microsoft offered a program called Virtual Desktop Manager for its Windows XP operating system.

The functionality has not changed much since then, and the core difference is that the new implementation is native which means that users don't have to install software to use virtual desktops on their computer.

But the native implementation is rather limited when it comes to what you can do with it. You cannot set different wallpapers for each desktop for instance, and there is no option to select to load a different desktop on system start. 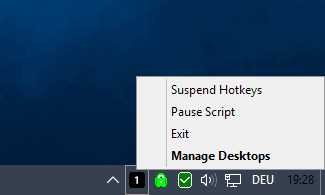 Virtual Desktop Enhancer is a free program for Windows 10 that extends the functionality of Microsoft's virtual desktop implementation. It leaves the core functionality untouched, but adds features to it that users may find useful.

Some of the features become available right away. You may use the keyboard shortcuts ALT-0 to ALT-9 for instance to switch between virtual desktops.

While Windows 10 supports shortcuts by default, it does not switch with shortcuts to open a particular virtual desktop right away.

So, the new Alt-key combination enables you to switch between desktops quickly, which is beneficial if you use more than two. The shortcut is easier to use also on top of that, so that it may work out better for you even if you only use one or two.

Another feature that the program adds to Windows 10 is that it displays the number of the active virtual desktop in its icon. You may need to configure Windows to display that icon at all times though before that becomes useful.

The two features that are not available right away are setting different desktop wallpapers for each virtual desktop, and selecting the start desktop that gets loaded when you boot Windows.

Both options are only configurable in the settings file that sits in the program's root directory. Open it in a plain text editor, and edit the features under General or Wallpapers.

To switch the desktop that gets loaded on start, simply change the number after DefaultDesktop= to its number.

Wallpapers are a different beast though. You may add solid colors using hex codes by using this format: 0xFF0000

You may also add paths instead that point to local images which will then be loaded as the wallpaper for the selected virtual desktop.

The program is offered as an exe file that you can run, or as an AutoHotkey script that you may run if you have the software installed on your device.

You may check out the official thread on Reddit for further guidance and direct feedback.|

If you work with Windows 10's native virtual desktop feature, you may find Virtual Desktop Enhancer useful as it adds several to the bare bones functionality of the feature.

Some users may prefer third-party alternatives that offer better functionality than Windows 10's native integration. There is nSpaces for instance which offers features such as password protection,  Dexpot, and a whole array of other virtual desktop managers.

Now You: Do you use virtual desktops?

Previous Post: « Do you Uninstall or Keep Software that you no longer use?
Next Post: Bulk Image Downloader 5.0 released »