The virtual desktop software Dexpot has been around for a long time, with each new version introducing a set of new features that improve the application significantly. Several beta versions of Dexpot 1.6 have been released by its author in the past seven months, introducing new features with every new beta version release.

Dexpot at its core is a virtual desktop software for the windows operating system.Â  The virtual desktops can be used to divide running applications into groups, like moving all download related apps and tasks to a second desktop so that they do not interfere with work on the first desktop.

Unlike other programs of its kind, Dexpot ships with a rich feature set that makes it ideal for users who need full control over the application. From password protecting individual desktops to custom resolutions and background images, there is a lot in terms of customizations that Dexpot makes available.

Dexpot 1.6 Beta introduces a whole array of new features to the virtual desktop manager. DexControl is probably the biggest new feature in the release. It basically improves desktop and program manageability with the help of the window catalogue and full-screen preview feature.

Window catalogue displays a tile vie of all open windows. A middle-click with the mouse button, or the selection of full-screen preview displays all virtual desktops on the screen. 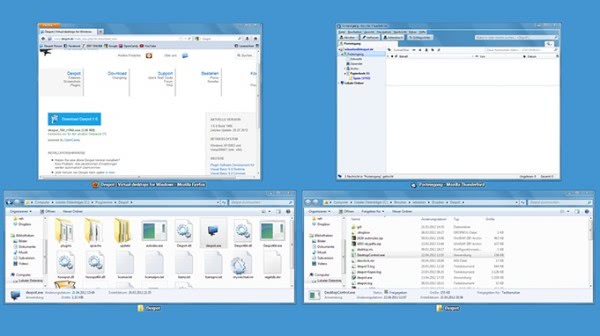 Full-screen preview mode can be used to move or copy windows elegantly to another desktop via drag and drop operations. It is furthermore possible to delete one or multiple windows, zoom in on desktops, or scroll through open windows with the mouse wheel. 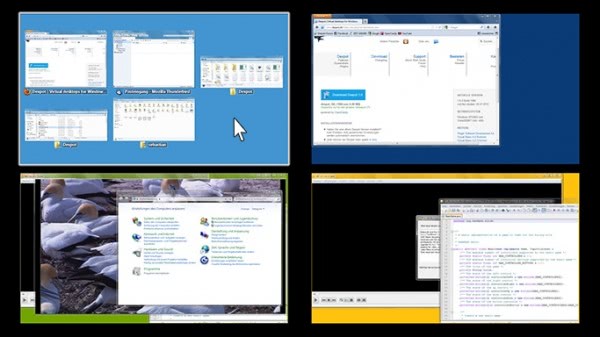 The new window management options are however only one feature of many that the beta introduces.

Dexpot 1.6 comes with full support for multi-monitor systems, with options to exclude some monitors from the desktop switching capabilities. It is now possible to customize background images individually, and assign applications to specific desktops so that they are opened on that desktop when started.

Another new feature is the persistent taskbat that can display all open windows on all desktops on the taskbar all the time.

Besides using the mouse or keyboard shortcuts to control program features and desktops, Dexpot users can now make use of hot corners to trigger certain events. This basically works by assigning actions to screen corners, which are then executed when you move the mouse into those corners.

Interested users should take a look at the beta download page for a detailed listing of all new features that are introduced in Dexpot 1.6. Dexpot is compatible with all recent 32-bit and 64-bit editions of the Microsoft Windows operating system. Some features, like DexControl, are only compatible with newer versions of Windows (Windows Vista SP2 and up).