Never 10 is a new program by Gibson Research for machines running Windows 7 or Windows 8.1 to prevent the upgrade to Windows 10 on these systems.

Microsoft makes it quite difficult for computer users to stay on Windows 7 or 8.1.

Not only is the company re-releasing updates designed to upgrade old Windows versions to Windows 10, it has changed the importance of the Windows 10 update recently on those systems, and -- accidentally it claims -- upgraded systems automatically and without user input before.

Several programs have been created in the past to help users block the upgrade to Windows 10 on computer systems running earlier versions of Windows. The most prominent is GWX Stopper but there are others such as the aptly named I don't want Windows 10. 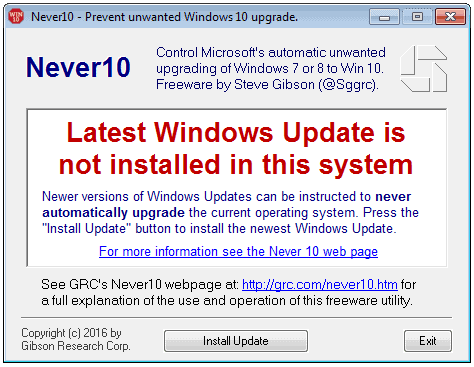 Never 10 has been designed to add a flag to Windows 7 or Windows 8.1 systems that prevents the upgrade to Windows 10 at all costs.

This means that it, unlike GWX Stopper for instance, does not need to be run on the system regularly to prevent the upgrade to Windows 10.

It does mean however that users can set the flag on their own on their system. We have published a guide a couple of months ago that explains how.

The program page does not explain in detail what the program though.

When you run the program, one of three things can happen: 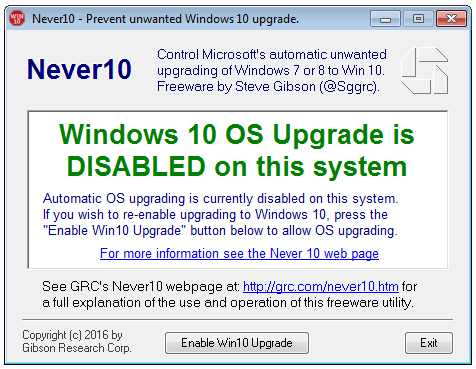 So, run once, follow the instructions and either hit the disable button right away, or if updates are missing, download those updates first before you do so.

Gibson Research published technical details that reveal what Never does when it is run. Basically, it sets or removes the following two Registry keys:

If you know your way around the Registry, it may be easier to apply the key directly instead as you won't have to download an extra program for that.

Never 10 is useful to Windows users who don't want to edit the Registry manually, and prefer a simple program that does that for them.

I suggest you create a System Restore backup or some other backup before you run the program though.

Check out our extensive guide to prevent the upgrade to Windows 10 on earlier versions of Windows.