Install multiple programs at once with these convenient tools - gHacks Tech News
ghacks.net

Install multiple programs at once with these convenient tools

If you ever had to set up a new Windows computer from scratch, you know how time consuming it can be to install all the programs you need on the machine.

While you could use specifically prepared Windows images to install all the required programs automatically during the installation of the operating system, it is not something that most users do as the process itself is rather technical.

Things are easy if you use portable software predominantly, as you can simply copy all the programs you require from one source (a DVD, Flash Drive, other storage devices) to the system and be done with that.

Some programs are not available as portable versions though, and not everyone wants to use them either. This would mean to run installers left and right on the system, carefully monitoring the installation process to make sure that adware does not slip by, until all programs are installed.

A better way, at least when it comes to popular applications and programs, is to use multi-installers. 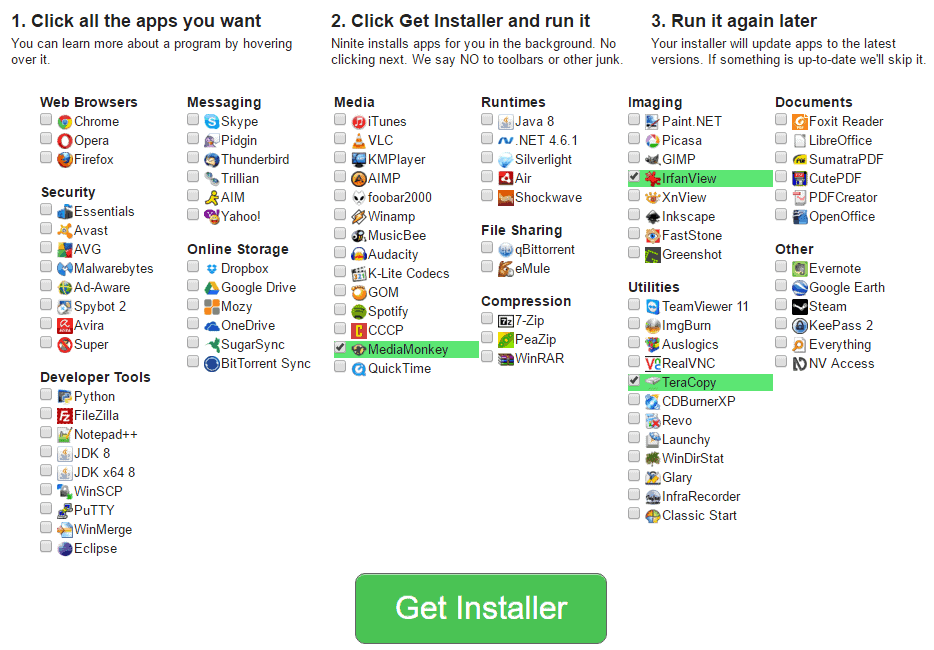 Ninite is a simple tool that you configure on the project website. Basically, all you need to do is select the programs that you want to install on your system on the homepage, and click on the get installer button afterwards to create a special installer for the selection. 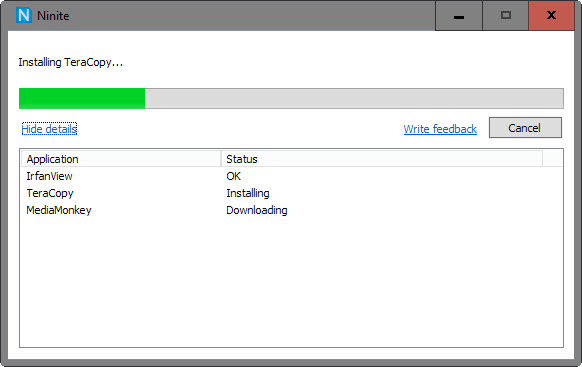 Ninite promises that the installer will always include the latest version of the selected program, and that individual program installers won't include toolbars and other third-party offers. It downloads the programs from the official developer website, and will check digital signatures or hashes to verify the authenticity of the application.

All programs are downloaded and installed without user interaction, and the custom Ninite installer can be run again at a later point in time to install program updates if available.

Chocolatey is a package manager similar to apt-get, but for Windows. It offers more packages and features than Ninite, but is more complicated to use as you run the commands from the command prompt.

This becomes obvious right from the get go as you need to run a command from an elevated command prompt to install Chocolatey on the system.

You can then browse the available packages on the official website and install those that you want added to your system.

The core command to install a package is "choco install" followed by the package name. Chocolatey supports additional commands or installer arguments that you can make use of, for instance to add parameters to the installer or install multiple programs at once by adding their names after the install command, e.g. choco install notepadplusplus googlechrome atom 7zip.

Chocolatey is powerful but at the same time not nearly as easy to use as Ninite. Good news is that it supports thousands of programs instead of just the hundred that Ninite supports, bad news that it will take longer to set it up and find the correct names for the programs to get them installed.

Unlike the programs that we have reviewed so far, Silent Install Helper does not limit you in regards to the applications that you can install using it.

While that is a positive, it means more work for you initially as you need to download the program installers to your system first before you can create a new batch installer job using Silent Install Helper.

What you do is add all the installers you have accumulated to the application. The program attempts to detect unwanted offers and will display information about those to you in its interface when it recognizes those. While that is not a surefire way of making sure junk does not get installed on your system, it may help you automate the declining of said offers.

You can customize the program installer, for instance by running commands before or after installation, or setting the unwanted software flag.

We have reviewed Silent Install Helper back in 2015, and suggest you check out the review for additional information.

Silent Install Helper does not restrict you to a collection of programs. Instead, it lets you create batch installers for any program you may come across. 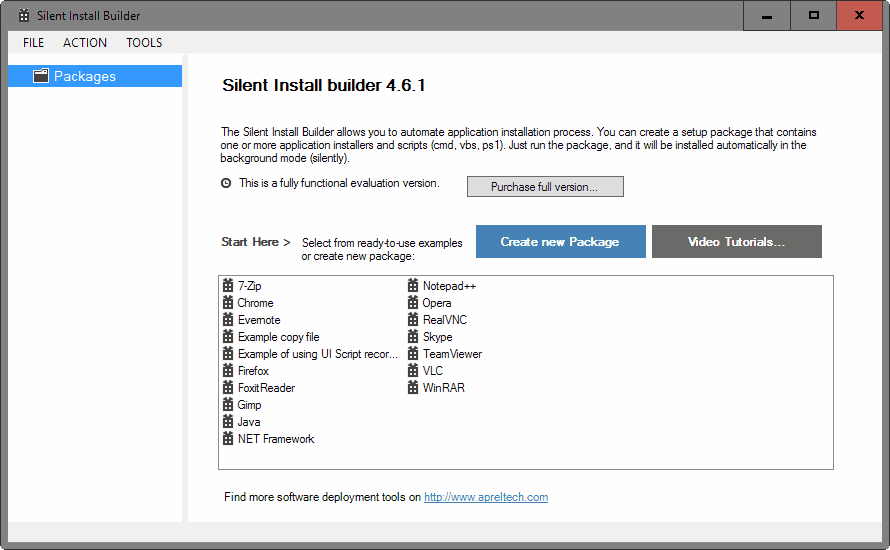 This is a commercial program but a fully functional evaluation version is provided on the developer website.

Each package you create contains one or multiple installer files or scripts that you want executed on the system.

As the name suggests, packages will be installed silently in the background, and you can create unattended installations as well.

Silent Install Builder recognizes popular application installers, and provides you with options to automate the installation of software using scripting language which allows you to record an installation process (which is mostly handy for installations on multiple computer systems).

As is the case with Silent Install Helper, this program requires that you download all programs that you want to install in one operation before you can do so. 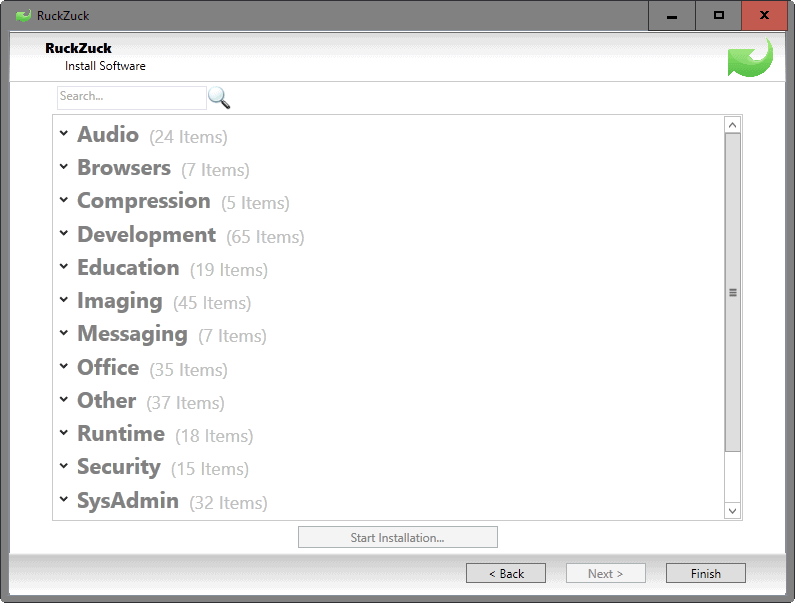 RuckZuck is a portable program for the Windows operating system that you can use to install multiple software programs or to update them.

Simple mark the programs that you want to install on your system, and hit the "start installation" button afterwards.

RuckZuck will download the applications using PowerShell and install them on the system once downloaded.

Programs are sorted into groups like Imaging, Audio or Security, and you will find many popular programs listed by it. All in all, a couple hundred programs are supported currently by the application.

Just Install works in many regards just like Chocolatey. It is command line program that you use to install one or multiple of the 120 packages it supports.

It supports many popular programs such as Firefox, Chrome, KeePass, Adobe Flash, Steam or VLC Media Player to name a few.

All multi-software installers are useful. Ninite is without doubt the easiest to use of the four reviewed here but it is also the program that is limited the most in terms of programs that you can install using it.

Now You: Did we miss a program? Lets us known int the comments below.

Martin Brinkmann is a journalist from Germany who founded Ghacks Technology News Back in 2005. He is passionate about all things tech and knows the Internet and computers like the back of his hand. You can follow Martin on Facebook or Twitter
View all posts by Martin Brinkmann →
Previous Post: « BurnAware 9.0 burning software released
Next Post: Never 10: prevent upgrades to Windows 10 »