The last few days have been packed with press conferences and announcements of new devices for Microsoft's upcoming operating system Windows 8.When you analyze the devices and tablets, you will notice that they can be easily grouped into the following categories: Windows RT tablets, Windows 8 tablets, Windows 8 laptops. The first two run on different hardware and serve different purposes. I have addressed the differences between Windows RT and Windows 8 here, only this much: Windows RT devices are limited to Windows Store apps, while Windows 8 devices can run Store apps and traditional desktop programs.

The following three devices have caught my interest. Unfortunately though we do not know enough about the devices yet which may change my perception of the device later on. While some of the device's specs have been revealed, we do not know anything about pricing, availability or other factors such as running performance or battery life.

Microsoft's own Surface Pro tablet is the only device of the four that has not been announced on the IFA. Microsoft announced the device family back in June, and weeks later that Surface RT devices will be available on October 26, while Surface Pro devices later in the year.

What I like in particular is the dockable keyboard that attaches to the tablet magnetically, and the built-in stand. The Pro version that I'm looking forward to has a full HD 10.6" ClearType display, weights about 900 grams, USB 3.0, either 64 or 128 Gigabytes of SSD storage and a larger 42 Wh battery.

It is a mobile device that I can see myself taking with me on trips to update this blog, answer emails and do other light computing work. I want the Pro variant as I want to install the desktop apps on it that I'm used to. 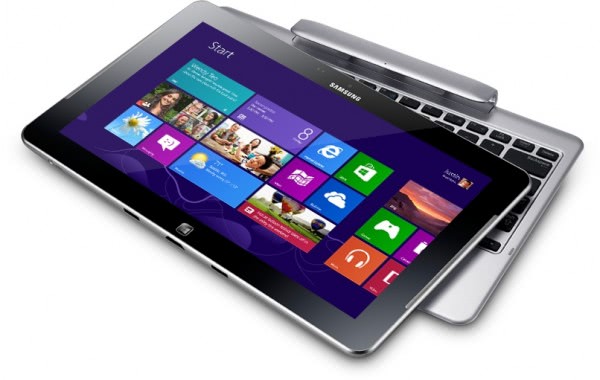 This is another Windows 8 Pro device with a keyboard dock running either an Intel Core i3 or i5 processor. As far as specifications go, we know that it ships with an 11.6" full HD display, 4 Gigabytes of RAM, battery capacity of 49Wh, Wireless Lan, Bluetooth 4.0, USB to Ethernet dongle for wired lan connections, and a front and rear camera with 2 and 5 Megapixels respectively. The Ativ PC Pro is lighter than the Surface, albeit only by 19 grams.

This is an alternative to the Surface Pro and I have to test both, and read some tests, before I make my mind up on which tablet I go for. While those two are devices I'm looking for in regards to tablet functionality and Windows 8, it is certainly possible that a different tablet will win me over in the end.

What I like about these two devices besides what I have already mentioned is that both keyboards include a touch mouse which is nice despite the fact that both use touch screens.

This one is interesting. It is a prototype that Samsung showcased on IFA. The device comes in a 11.6" and 13.3" variant with a 2560x1440 resolution which is similar to Apple's Retina display. The Samsung Series 9 WQHD features a matte display which surely is a selling point for many mobile users on the go.

Samsung has not revealed much about the device, only that it won't be released any time soon. What we will see though is a full HD version that will be released in the next time (likely after the Windows 8 release).

I want to buy one tablet or laptop running Windows 8 Pro shortly after the operating system comes out. Only the first two will likely make it in time to be included in my decision, while the prototype Series 9 WQHD likely won't.

Have you followed IFA and the announcements so far? If so, do you have a favorite tablet or laptop you are looking forward to?