Lets take a look at the spec sheet for both Surface tablets first before we analyze the device further. Please note that Microsoft did not reveal all of the specs just yet. 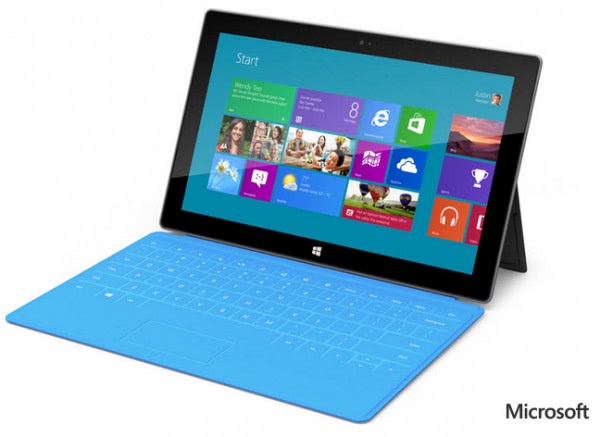 The Windows 8 Pro version of the Surface tablet has a full HD display of the same size, weights 903 g and has a width of 13.5 mm. It features a larger battery that is packing 42 W-h, ships with an USB 3.0 and microSDXC port instead, and offers 64 Gigabytes or 128 Gigabytes of storage. It also ships with a pen with palm block that the RT Surface version does not ship with.

As you can see from the specs listing above, Microsoft did not reveal all the hardware specs of its Surface tablets yesterday. The spec sheet is missing information about the processor, the RAM, the actual display resolution, the video card, the type of hard drive (likely SSD, but how fast), how long the devices will run on battery on average, and the price.

As far as price goes, Microsoft mentioned that it will be competitively priced with "comparable ARM tablets or Intel Ultrabook-class PCs". This puts the Windows 8 Pro version of the tablet at least in the $800 range with the possibility that it could even be priced higher considering that some Ultrabooks retail for twice the amount or even more. It is however likely that both tablets will be offered at a price well below the $1000 mark, likely closer to Apple's top of the line iPad that is currently retailing for about than $720 in its 64 Gigabyte edition. The RT version will likely be more in the $600 range though.

What makes the Surface tablet interesting is not that it is a first party tablet running Windows 8, nor the hardware that Microsoft built-into it. The most interesting aspect here is the integration of the qwerty keyboard in the cover of the tablet and the stand that is also integrated in it.

The keyboard should appeal to many professionals and users who often have to use the keyboard when they work with the tablet. And since it is included in the cover, it is far more practical of a solution than a third party keyboard accessory that you have to carry around with you as well. It obviously depends a lot on how well the keyboard is designed. It is likely that it will work quite well, considering Microsoft's experience in the keyboard vertical.

And then there is the pen with digital ink, which we do not know that much about right now. It is magnetic and attaches to the Surface tablet, andÂ  could be a great asset for writers and users who work with images and other types of media. Again, it really depends on how fluent and exact it is which no one can say for sure right now.

So, who is Microsoft targeting with the Surface tablet? That's a hard question to answer, considering that it can be used for many different purposes. From a device for pure entertainment like Apple's iPad, to professional applications. Journalists for instance could be very interested in this as it could replace the netbook / notebook that they'd carry around with them otherwise. This of course under the premise that the keyboard is as good as Microsoft has made it sound like.

Businesses could also be interested in this, as most will have no troubles integrating Windows devices into the company network or infrastructure.

Microsoft's Surface tablet is more than another tablet, or a tablet that the company tries to position against Apple's iPad. It is also a demonstration of what tablets with Windows 8 can look like. There will be others obviously from companies like Acer, Dell or Samsung, and it will be interesting to see how these tablets compare with the Surface tablet.

It may take a couple of months before we can finally draw a conclusion when Microsoft reveals pricing and detailed spec information.

Have you followed the announcement? Do you think that Microsoft has produced a winner here?