The thing that I'm most interested in when it comes to the Windows Store in Windows 8 are games. The core reason for this is that games can offer me something that apps can't. For every app in the store, I have a desktop program that may provide me with the same functionality without restricting me to running it in full sized or 1/3 or 2/3 mode.

My hopes are that this is different for games. While I don't expect the next Halflife or Warcraft to be available in the store any time soon, it is likely that a list of games will be made available that Windows users may otherwise not have access to at all.

Microsoft today has announced the first wave of Xbox games that will be available in Windows Store on October 26, the release date of the Windows 8 operating system. 29 of the 40 games listed are produced by Microsoft Studios, while the remaining 11 by game producers such as Rovio, Gameloft or Miniclip.

I'm not an Xbox gamer and can't really say a lot about the games that will be released when the operating system launches. The only games that I heard of are Angry Birds, Cut the Rope, Fruit Ninja, Hydro Thunder, Mahjong, Minesweeper and Solitaire, as well as Pac Man. You can check out the full list here on the Windows Team Blog.

If you run the RTM version of Windows 8, you may have noticed that some of the games listed here are already available in the store. This includes the Minesweeper, Mahjong and Solitaire games, as well as Fruit Ninja or Cut the Rope.

These games can also be accessed via the games app that comes preinstalled in Windows 8. Here you find a mix of games available for Microsoft's Xbox gaming system, Store games and desktop games that you can play on your Windows system, and information about your Xbox account and friends. 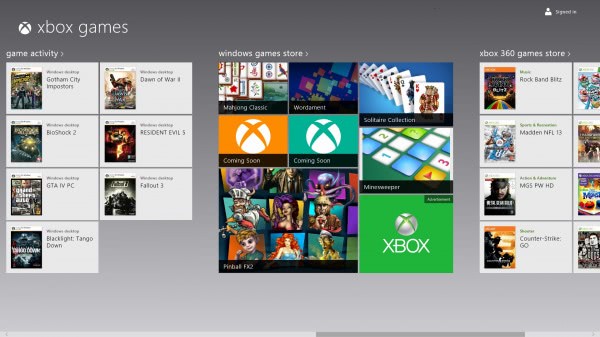 You can expect that the majority of games that get released are casual games which you can compare to modern Flash or HTML5/JavaScript games. That does not necessarily need to be a bad thing, considering that these types of games are immensely popular on the Internet. It all comes down to price though in the end and that is something that Microsoft has not mentioned yet.

The Xbox integration, along with its leaderboards and other features could be reason enough for console gamers to give this a try, especially when they see their friend's score pop up on their screens for the first time.

Do you think that porting Xbox games to Windows, or making exclusives available on Windows, will be a successful strategy for Microsoft?

Previous Post: « Should you get a Windows RT or Windows 8 computer?
Next Post: « 3 Windows 8 devices that I'm looking forward to