Microsoft Windows Update Overview, All You Need To Know

Windows Update is a free computer service provided by Microsoft that provides Operating System (OS) patches and service packs to computers running the many versions of Microsoft Windows.

These updates are either enhancements or corrections to OS features, or security updates meant to protect your system from malicious attacks and malware.

Reliability, security and performance are the the most important reasons that all computers running MS Windows should use Windows Update.

An option called Microsoft Update can be configured in this service to also provide updates for several other Microsoft software applications, such as the MS Office suite or the latest Internet Explorer browser.

Windows Update always downloads these vital updates automatically. But, you can set up the service to install all or some of the updates as they are received, or to let you review the pending updates before you decide on which to install. Windows Update will provide a Windows PC with:

Upgrades are different from updates, in that upgrades are new versions of application software, or of the OS itself. Minor version upgrades may be available from Microsoft through Windows Update, but major version upgrades would likely involve a new software purchase, perhaps at a lower upgrade price.

The Microsoft Download Center is a website that contains all the elements of the Microsoft software updating, upgrading, and downloading programs that are both necessary and useful for the continuing operation of your Windows operating system. 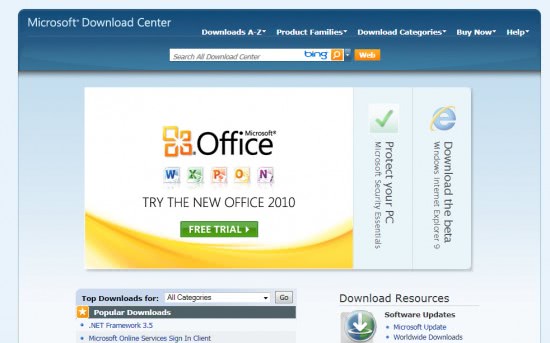 The web site contains sub-sites for:

Note: Microsoft started to push updates via its Microsoft Update Catalog website recently. Updates offered on the site are downloaded and installed manually.

Patch Tuesday, the second Tuesday of every month, is the day that security updates are globally distributed via Windows Update and the Internet. Emergency security updates, however, may be distributed any time it is deemed necessary because of a newly discovered exploit that targets MS Windows.

The Internet is the preferred avenue of distribution for Windows Update to PCs, but Microsoft also provides other means for updates to be received by computers with no Internet connection. However, the PC interface controlling receipt of distributions is different for the various versions of Windows:

With any OS before Windows Vista, an update that required a PC reboot would display a dialog box every few minutes which would request that the machine be rebooted.

In Windows Vista and Windows 7, the same dialog box allows entry of a time period, up to four hours, before another dialog box appears -- however, some updates that require a reboot may create a displayed countdown, at the end of which the computer will reboot no matter what the current user on the PC is doing, causing possible problems if data is not saved or the user is in the middle of a game.

Tip: It is possible to prevent the forced shutdown manually with the command shutdown â€“a in the Windows command line.

If there is an unexpected PC shutdown in the middle of an update download, Windows Update makes use of a feature of Windows system files called Transactional NTFS to enable the system to recover cleanly and to ensure that partially loaded updates are fully loaded before being applied.

There are three levels Of Window Updates: Optional, Recommended, and Important.

Optional Updates, are, of course, optional, that a user can review, and choose to install or not to install. Included are:

Recommended Updates are those enhance the computing OS experience, improving performance. Included are:

Important updates are oriented more toward security and reliability. Included are:

Options can be set to download and install automatically both the Important updates (set as a default) and the Recommended updates -- with Windows XP, however, only the updates that are classified High-Priority will be downloaded and installed automatically.

Microsoft started to push out so-called cumulative updates with the release of Windows 10. The company switched to a similar system on Windows 7 and 8 in 2016.

On Windows 10, PCs are assigned to a servicing channel which determines the updating procedure. Home versions, and all unmodified Pro, Education and Enterprise versions are assigned to the Semi-Annual channel.

On Windows 7 and Windows 8, two update packages are provided each month:

For individual users, REGEDIT is used to disable Windows Update in a User Registry key:

The following tools and articles may also be useful:

Once you have made sure that updates work fine and don't cause any issues, you may want to run clean up operations to remove files that are no longer needed. This may free up Gigabytes of disk space depending on the update.

Windows Update is an essential maintenance element for the optimum performance of your computer. However, errors can occur during the normal operation of this important service. Here's where we describe what measures you can take if Windows Update stops working on your computer system.

Make sure the date and time of the operating system is set correctly. Simply move the mouse cursor over the time in the system tray area to verify that.

Windows Update may not work properly if the date or time is not set correctly.

Windows Update depends a great deal on Internet connectivity. First step is to see if you have full Internet connectivity by connecting to several web sites -- if able to do so, the next step is to check the reliability of the connection, by checking email, signing on to forums, and looking at videos. If connection seems reliable, wait fifteen minutes and try running Windows Update again.

Windows Update depends on several other services that also must be running on your PC. Check for these other services by clicking on Start, typing SERVICES.MSC, and pressing ENTER. Check in the display of services at the right for the names:

For each one whose Status is not Running, double-click to make the General tab appear -- Startup Type should be Automatic. Click the Start button to change the service to a Running status.

The next measure to make sure the Windows Firewall is running, and not a firewall from a company other than Microsoft. To ensure continuous firewall protection, turn on the MS Firewall before turning off any other firewall.

A corrupt file within the Windows Update distribution folder may be causing a problem with Windows Update. The solution is to reset the folder.

System files may have become corrupted, and you may need to scan the Windows system files to see if they are still correct and accurate.

Try running Windows Update when your PC comes back up.

BITS stands for Background Intelligence Transfer Service, and these files are essential to the functioning of Windows Update. It is possible the BITS files on your PC may be corrupted. You can download a BITS repair tool at the MS website:

Once you've downloaded and installed the BITS Repair Tool on your PC, reboot and let the tool run.

Check these two Microsoft support websites for descriptions of problems that may be similar to yours, with possible solutions.

Microsoft has released the System Update Readiness Tool for its operating systems that aim to repair issues related to the operating system's automatic update functionality.

If you are experiencing issues, download the tool for your system and run it afterwards to resolve issues that you may experience.

If this last measure does not help you to restore Windows Update to its proper functioning, then contact MS Customer Support.

Here are several update tools that will help you take care of the need for updates by your other software applications.

The free program is a third-party downloader for Windows Updates. It enables you to query the Windows Update server for updates, and download updates selectively.

Supports all Microsoft operating systems and languages. Users just need to select their operating system and language from the list to download all updates for it. It is optionally possible to create an ISO image or copy the data to an USB device instead of a hard drive. The patches can then be applied once everything has been downloaded.

Only for pre-Windows 7 operating systems. WUD allows you to download all of the current Windows Updates using a simple interface. All of the updates are contained in Update Lists (ULs) which allows you to choose which updates you want for which version of Windows.

Update Star is a freeware application that helps you keep track of all the software installations on your PC, checking that the latest patches, fixes, and updates are downloaded for whatever is installed on your PC. This software does not download anything, though.

This monitoring tool checks with an online database to see what's current for updates for many software packages, and displays a notification when there is an available update (although it does not do the download itself).

This monitoring software, from Secunia Company, uses a database containing information on over four thousand software applications to inspect your system for weak spots, such as missing critical patches for software installed on your PC. The software, however, does not download anything.