Offering some sort of extensibility can improve the overall usability of a software program. The prime example for this is the Firefox web browser which would only be half as good without its extensions.

The Windows Live Plug-ins website is currently listing plug-ins for Photo Gallery, Movie Maker and Writer. The interesting part is that Microsoft welcomes developers to develop and submit plug-ins for Windows Live which could be offered on the official site eventually, if they pass some form of quality assessment. 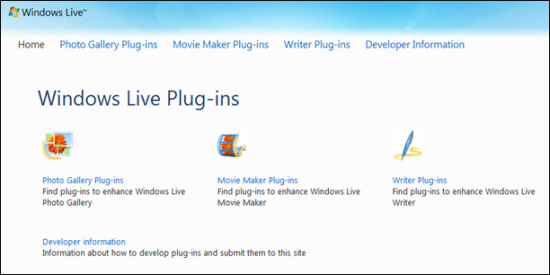 A total of 191 plug-ins are currently offered at the Windows Live Plug-ins site, the majority of them (177) for Windows Live Writer. Lets take a closer look at the categories:

Windows Live Writer users are most likely to find plug-ins that will improve their workflow.

It remains to be seen if Microsoft can entice developers to code plug-ins for Windows Live. Lets hope it does not end up similar to developing browser plug-ins for Microsoft's Internet Explorer (which is more or less non-existent).