The space a Windows operating system requires grows over time thanks to service packs and updates mostly, but also thanks to other system files and programs that users install on their PC.

There are only a few situations where the space requirements drop. This can be after you decide to uninstall a feature that you do not want to use anymore, of by running the Disk Cleanup tool after the installation of a service pack to remove backup files from the system that are created automatically as an option to restore the system to a pre-Service Pack level.

Microsoft released a new plugin yesterday for the Disk Cleanup tool on Windows 7 that adds another option to free up used disk space: and boy is it good.

Update: It is also integrated in Windows 8.1. Do not expect wonders right now here though. The way to launch it is the same as under Windows 7.-

You are probably wondering why this is happening. All Windows updates are stored in the WinSxS store regardless of whether they are superseeded by later updates or not. This is done to provide you with options to roll back to a superseded update.

This is usually not required if you have run tests to make sure that the latest update does not have any ill-effects on the system, or if you have worked with the updated PC for some time now and have not noticed any issues caused by the new update.

This in effect mimics the removal of older files after the installation of a service pack, and should be handled in the same way. 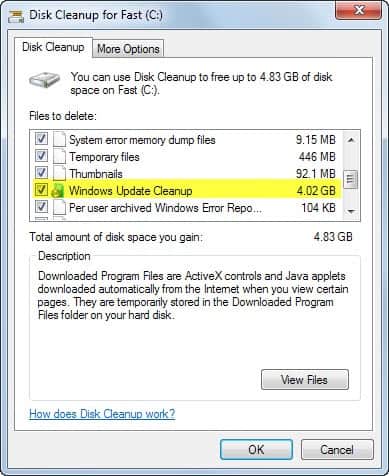 The new plugin is currently only available on PCs running Windows 7 Service Pack 1. To run the tool, do the following:

You can automate the process by using command line parameters the Disk Cleanup tool supports.

Additional information about running Disk Cleanup manually or automatically are provided by Microsoft.

The new Windows Update Cleanup plugin for the Disk Cleanup tool is a great addition for Windows 7 users as they can free up lots of space when they use it.

A quick check of the Windows folder on my system revealed that it had a size of 28.7 Gigabytes prior to running the new plugin. After a restart, that value dropped to 24.5 Gigabytes for the Windows folder. (my thanks go to Ilev and Ank91 for providing me with the information)

Martin Brinkmann is a journalist from Germany who founded Ghacks Technology News Back in 2005. He is passionate about all things tech and knows the Internet and computers like the back of his hand. You can follow Martin on Facebook or Twitter
View all posts by Martin Brinkmann →
Previous Post: « Windows 7 not outpacing Windows 8 in terms of growth
Next Post: StartIsBack+ adds taskbar to Start Screen on Windows 8.1 »