A friend's computer running Windows 7 had been recently infected with the rootkit TDSS which resulted in redirects in all web browsers to affiliate sites. The problem is commonly known as Google redirects and the issue had been fixed back then.

My friend contacted me again after the cleanup asking for help because Windows Update was not working anymore. Whenever Windows Update was used it would run for a long time and display the error 0x80072ee2 in the end without downloading and installing any available updates.

A quick research on the Internet revealed that this error message was related to connection problems to the Windows Update servers.

None of these suggestions helped solve the connection problem. Error 0x80072ee2 was displayed after all attempts.

The first thing that one should do when encountering Windows Update errors is to look at the Windowsupdate.log file in the Windows folder. This contains a log that lists all connection attempts, status reports and error messages that are encountered when trying to connect to Windows Update.

Open an elevated command line from the start menu. You do that with a tap on the Windows-key, typing cmd.exe, right-clicking on cmd.exe and selecting the run as administrator options. If you like to use the keyboard, hold down Shift and Ctrl before left-clicking on cmd.exe instead.

Enter [netsh], then [winhttp] in the command line so that the screen looks like this afterwards. 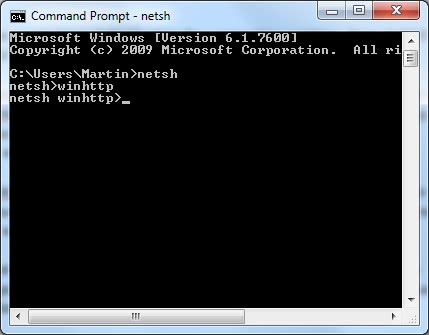 Now enter the command [import proxy source=ie]. This will import the proxy settings of Internet Explorer which means either direct access to the Internet without proxy if no server is configured or the proxy server that is used to connect to the Internet. 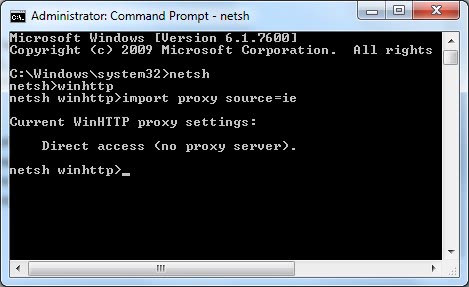 This should have resolved the connection problems to Windows Update if a proxy server was the problem. Winhttp can also be used to set a specific proxy server by using the [set proxy address] command. A restart of the computer might be needed before the changes are taken into account (or killing the explorer.exe process and reloading it).

If you are interested in all netsh commands available, check out this Technet help document that lists and explains them all.

Article Name
Fixing Windows Update Error 0x80072ee2
Description
Find out how to fix the Windows Update error 0x80072ee2 when you are trying to use the service to look for, download, and install new updates for Windows.
Author
Martin Brinkmann
Publisher
Ghacks Technology News
Logo

Martin Brinkmann is a journalist from Germany who founded Ghacks Technology News Back in 2005. He is passionate about all things tech and knows the Internet and computers like the back of his hand. You can follow Martin on Facebook or Twitter
View all posts by Martin Brinkmann →
Previous Post: « Subtitle Converter
Next Post: This Program Might Not Have Installed Correctly »