BleachBit is a long standing free alternative to CCleaner and other commercial system cleaners. The open source program was updated to version 2.2 recently. That, and the fact that some people don't like the direction that CCleaner development has taken since the Avast acquisition of Piriform, justifies another look at the program.

First the basics: we followed BleachBit's development ever since our first two reviews here on Ghacks in 2010. Jack Wallen reviewed BleachBit for Linux, and I took a look at the Windows version of the application in the same year. The developer released BleachBit 2.0 in 2018, the last major update of the software application.

BleachBit is a system cleaner that supports Winapp2.ini files to improve its cleaning, and also CCEnhancer which does the same thing basically. 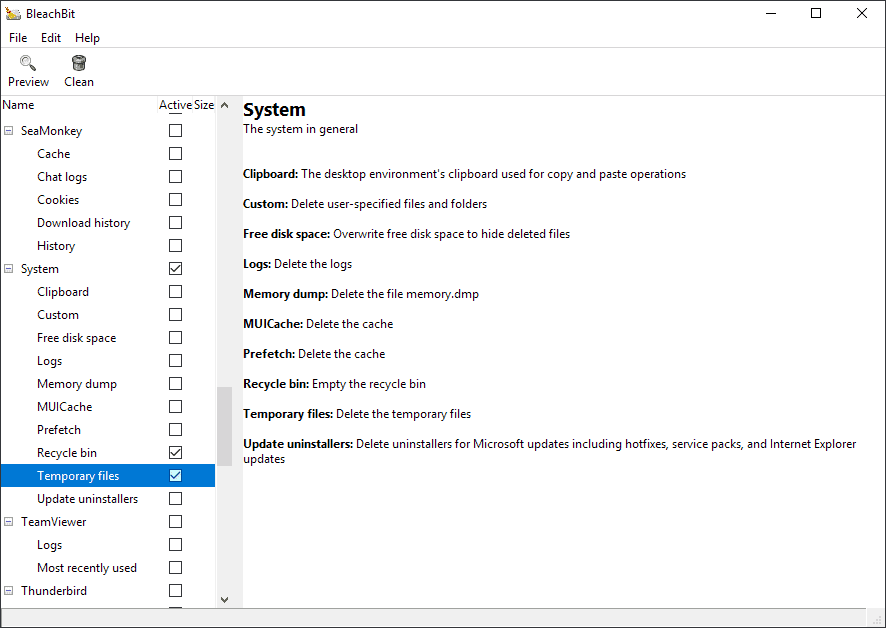 You can download a portable version or installer from the BleachBit website to get started. The application itself is easy to use but requires some level of expertise when it comes to the choices that it presents to you.

BleachBit displays the available clean locations sorted into groups for easier access. Each has a checkmark associated with it to either check individual items or entire groups. BleachBit displays descriptions for each item when you select it. While it does not provide a detailed description or information, it should give a rough understanding.

A click on preview starts a dry run that scans all selected areas without making any changes to the application. The process adds information to the size column so that you know how much space you will free up when you run the clean operation.

The log on the right side of the interface displays all items that will get deleted or cleaned when you run the clean-up operation.

BleachBit supports other options: you can add custom locations to clean, add folders to the whitelist, or shred files or free space to remove traces.

I like BleachBit: it is portable, open source, and does not nag you or try to sell you upgrades to professional versions. The program needs an interface update in my opinion to take it closer to CCleaner and make it more attractive to users who prefer that.

Now You: Which cleaner program, if any, do you use?

Martin Brinkmann is a journalist from Germany who founded Ghacks Technology News Back in 2005. He is passionate about all things tech and knows the Internet and computers like the back of his hand. You can follow Martin on Facebook or Twitter
View all posts by Martin Brinkmann →
Previous Post: « Paint.net 4.1.6: performance improvements and new options
Next Post: A look at Snappy Driver Installer Origin (update Windows device drivers) »