BleachBit 2.0 is a new version of the temporary cross-platform file cleaner that is often compared to Piriform's CCleaner application for Windows.

BleachBit is configured to run checks for updates regularly. You can download the latest version of the program from the official website to upgrade the existing version, however, if you prefer that.

Tip: Bleachbit supports the integration of winapp2.ini definitions. You enable the option under preference and Bleachbit downloads the additional definitions so that you can clean hundreds of additional locations and programs. 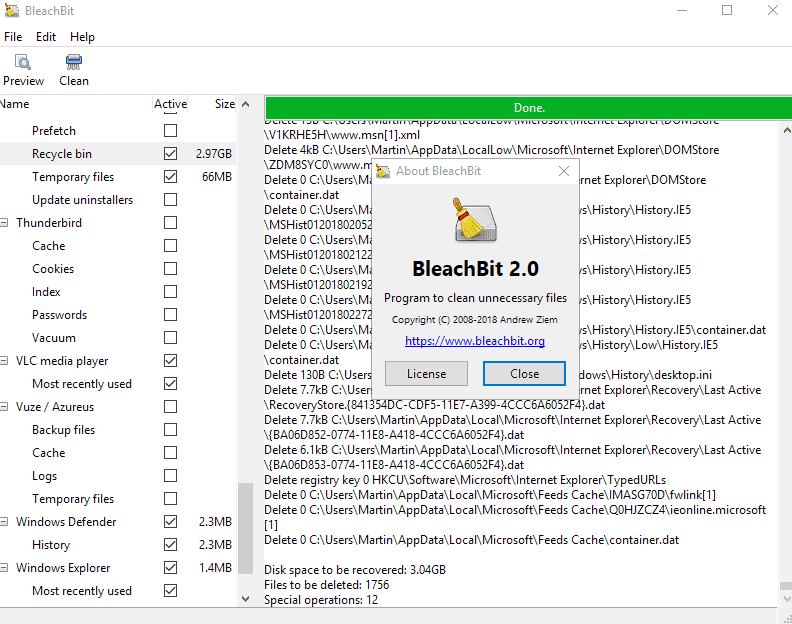 BleachBit 2.0 ships with a bunch of new cleaning options and improvements. Users of the program can clean the site engagement history on Google Chrome and Chromium, and secure delete SQLite in the latest version.

On Windows, the secure wiping of files and handing of Unicode filenames was improved, and several issues such as the emptying of the recycle bin in preview mode, were fixed as well.

You can check out the full release notes on the official program website.

BleachBit 2.0 works for the most part just like previous versions of the application. Check the programs and locations that you want to clean and hit the preview button. This scans the selected locations and programs on the system and reports the findings without making any changes to them.

BleachBit displays the total amount of disk space that will be freed when you run the program, and all files and locations that will be cleaned if you do on top of that. You can rerun scans to include more items, or check out the the disk space that each item occupies as well.

The preferences give you options to add custom locations to the cleaning. Note that you need to select the custom option as an item for it to be included. There is also a whitelist to exclude files or locations from deletion,  and an option to overwrite locations to prevent recovery. 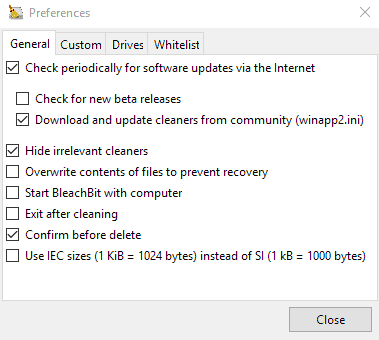 The file menu holds options to shred files or folders, and to wipe free disk space to prevent recovery of deleted files.

The developer of BleachBit created a video that visualizes the development of the program from its humble beginnings in 2008 to 2018.

How it stacks up

BleachBit is open source software that is available for Linux, Mac and Windows devices. This is a plus when compared to the popular CCleaner application.

CCleaner's interface is more streamlined in my opinion but both programs get the job done when it comes to the removal of temporary files on supported computer systems.

BleachBit supports adding folders to the application for removal, but the interface lacks options to do the same for Registry keys. You can add these manually by editing the ini file but it is not overly comfortable.

I'm not a fan of the Registry cleaning tool that CCleaner ships with and don't think it is a problem that BleachBit does not include one. The same goes for CCleaner's other tools like the startup manager or program uninstaller. There are better programs out there such as Autoruns that handle this better.

CCleaner comes with options to schedule cleanup jobs or keep some cookies which BleachBit does not support. Whether that is a problem or not depends on your use of the program.

BleachBit, all in all, is a powerful program that takes the backseat (a bit) in the interface department and some cleaning options when compared to CCleaner. It is cross-platform and open source on the other hand which CCleaner is not.

BleachBit 2.0 is a powerful program to clean temporary files created by web browsers, the operating systems, or programs that run on it. You can use it to clear browser caches and cookies, temporary files, or lists of recently run documents or files.

Now You: Do you use a file cleaner?