Cleanmgr+ is a Disk Cleanup alternative

Cleanmgr+ is a new software program for Windows by the maker of CloneApp and CloneApp UA. Microsoft revealed during the release of Windows 10 version 1809, the October 2018 Update, that it deprecated the Windows' Disk Cleanup program.

Microsoft did included the ability to clear the downloads folder recently indicating that Disk Cleanup is not dead. 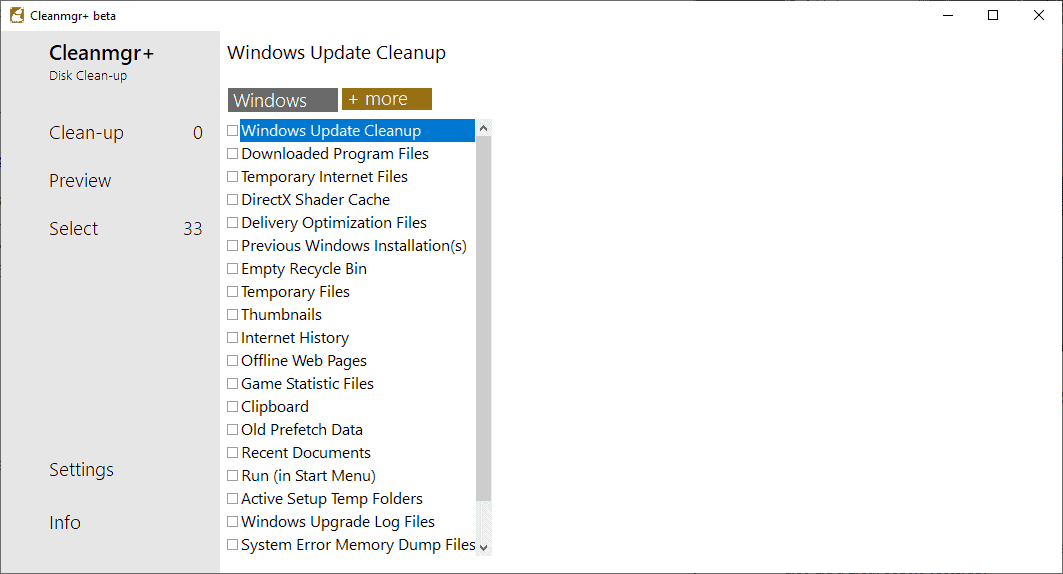 Cleanmgr is an attempt to replicate Disk Cleanup functionality. It is offered as a beta version at the time of writing and you may run into issues downloading or executing it.

Chrome, the browser I used to download the program, blocked the download initially and I had to allow it manually to complete.

Some options, the cleaning of Language Resource Files or Device Driver Packages, are not supported in the beta version that I ran.

A click on More displays additional cleanup options including those not supported by Disk Cleanup. Cleanmgr+ supports the cleaning of browser caches -- Google Chrome, Mozilla Firefox, Vivaldi and Opera at the time of writing -- and some extra cleaning options such as clearing the Windows Icon Cache or MUICache.

Just check individual items that you want to clean and hit the preview button to make a dry run. The application displays information about the cleanup if you would run it on the device.

The selection of clean-up starts the process; the program displays a log of events and highlights what is being cleaned and the gain in space on the device. The Settings display some options that you may find interesting. You may use them to enable the display of descriptions to better understand the cleaning options. You may also enable the inclusion of Windows Disk Cleanup which will load Disk Cleanup for as long as it is still there so that you may run the cleanup using it as well (even with automation), and may include a custom cleaner next to that,

MajorGeeks produced a quick overview video of the application. Go check it out below:

Cleanmgr+ is offered as a beta version currently. The program is promising already as it replicates most of the functionality of Disk Cleanup.

Some areas need to be improved to make it a true successor though: increase the size of the sidebar that lists the items so that they show up fully. Maybe add an option to compact the left sidebar with the options to make more room for the other sidebars.

The main thing that it is missing right now is information about the storage space that each of the data sets occupies on disk currently.

Now You: Do you use a disk cleaner?