Users of the popular BitTorrent software uTorrent who have updated the client to the latest release version may have spotted the new Game Store entry on start already.

Game Store is an integrated store for digital computer games that users of the software may buy directly from within the client.

It seems to feature classic games and independent (those not from a major publisher) games right now. That's not necessarily bad, as these games have quite a few fans as well.

Game Store is a new entry in the left sidebar menu of the uTorrent client. It is listed beneath upgrade to Pro and before the actual torrents list. While this ensures that most users will notice the new entry right away, it is probably not the best location for it from a usability point of view.

The Store features games for Windows, Mac and Linux, and you may browse its front for some suggestions, or click on the more link to browse the whole catalog and use the built-in filtering system. 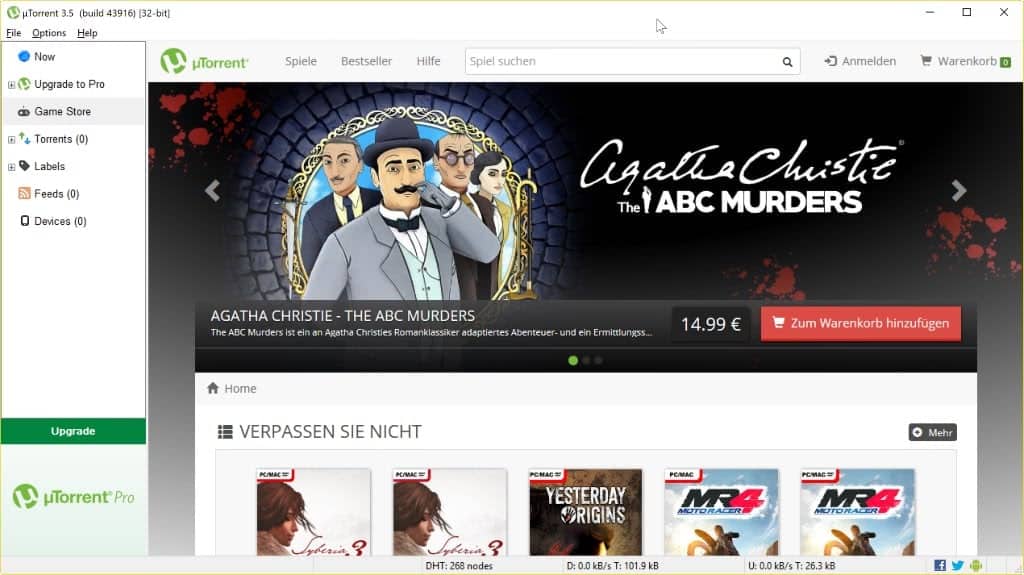 The selection of games in the catalog is quite limited right now which is definitely something that the team needs to work on.

What is probably more problematic from a user perspective is how the actual buying and downloading of games happens.

Payment options may differ depending on the country that you access the store from. In Germany, PayPal and credit card payments are supported as well as a service to make a direct transfer from your bank account to the service.

These payment options are integrated directly in the uTorrent client. This means that any part of the payment process is handled in uTorrent.

This cannot be said for the downloading however.

While you might expect the Store to make use of the torrent protocol for fast transferring and convenience, since you are already in the client when you make a purchase, this is apparently not the case.

I made a trial purchase earlier today, and while payment was accepted, I have yet to receive the email that includes instructions on downloading the game. According to Neowin, games are provided as Steam keys that uTorrent users need to redeem on the Steam gaming platform.

There is nothing inherently wrong with that, provided that it offers an advantage over making the same purchase on Steam directly. It is too early to tell if that is the case though, as the Steam Sale that is going on right now makes that difficult. If games are offered for a discounted price when compared to Steam, it may be able to generate some attraction, but if the pricing is identical, there is little incentive to buy using uTorrent's Game Store.

Note: The uTorrent client includes third-party offers during installation. The company began pushing adware in uTorrent in 2012, and promised to move away from the bundled offer back in 2015 when a Bitcoin Miner was distributed through its offerings.

BitTorrent Inc plans to put more focus on uTorrent, as many of the company's other endeavors aimed at diversifying income were not as successful as hoped. The company added uTorrent Plus, a subscription-based version back in 2011 that does away with ads and comes with additional benefits such as a media converter.

Now You: A Game Store in uTorrent, what is your take on that?