Both Google with its Google Mail service and Microsoft with its Outloook / Hotmail email service are providing their users with options to upload email attachments to the cloud instead of attaching them directly to emails sent from the websites of those services. The main advantage here is that there is no chance that emails will bounce because of reaching an artificial attachment limit set by the receiving email provider.

Yahoo Mail up until now did not offer this feature. Today Yahoo announced a new cooperation with the cloud hosting provider Dropbox that integrates the hosting service into Yahoo Mail.

Three core options are added to Yahoo Mail as part of the partnership between the two companies: 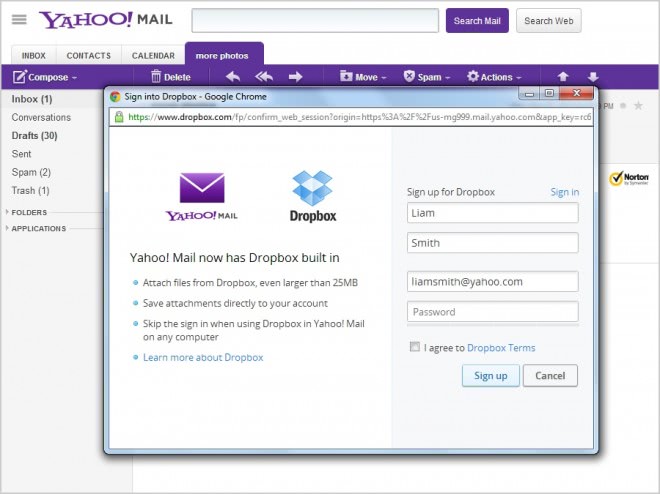 The feature is being rolled out today for Yahoo Mail users who use the English, French, German, Italian or Spanish interface of the email provider. It is likely that support for additional languages will be introduced in the near future.

First time users need to link their Dropbox account to their Yahoo account. This can be done in several ways, for instance by selecting an attachment in an email, then Save to All and finally Save to Dropbox from the menu. This opens a sign up form that new Dropbox users can use to sign up to the service. Existing users can switch to Sign in to enter their Dropbox credentials and get started.

There are likely other ways to link the Dropbox account to the Yahoo Mail account, but since the feature is not live yet, there is no way of telling what they may be. I update the article once I can test it on Yahoo Mail.

A cooperation with Dropbox is certainly a move in the right direction, considering that Yahoo Mail was trailing behind other email providers in this regard. Considering that Yahoo does not have its own cloud hosting service that is available to the general public, it is even possible that we may see a much larger cooperation between the two partners in the near future.

The feature is now enabled in my Yahoo Mail account. Yahoo has added a small arrow icon to the attachment icon that you can click on to display a small context menu. Here you can select the share from Dropbox option to attach a link to a Dropbox file or files on Dropbox. You need to link the Yahoo Mail account to Dropbox the first time you do so, and then sign in to your Dropbox account to complete the process. 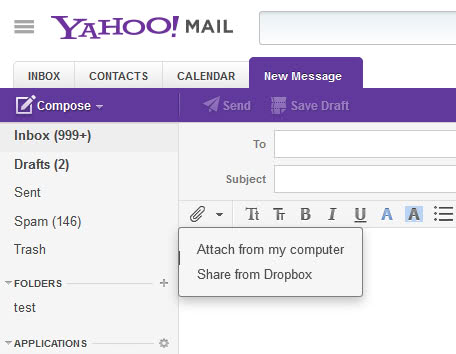 A new folder is created on Dropbox named Yahoo Mail that is used to store the email attachments. You can not only use Dropbox as a file host for attachments that you want your contacts to access, but also to save attachments that you have received. Just select the save option or save all to option and select Dropbox to save the files to the online storage provider.

Previous Post: « Dropbox acquires Mailbox and the team behind it
Next Post: Gmail: Hold down Shift for a larger compose window »