RetroUI Pro: run Windows 8 apps in windows on the desktop

There is not a lot about the Windows 8 operating system that has not been hacked, tweaked or modified in one way or the other by talented programmers. We have seen the release of more than ten start menu alternatives,, programs to bypass the start screen to boot right into the desktop, and applications or tweaks to disable the Charms Bar or the hot corners of the operating system.

What has been missing until now was an option to run Windows Store apps in a window on the desktop. And that's exactly what the latest update of RetroUI Pro brings to the table. I need to mention that it is a commercial application that is availabe for $4.95 just like Stardock's Start8 is. Well, there is a free version but it does not offer this functionality.

The program adds a unique start menu to Windows 8, one that does not resemble the start menus of previous versions of Windows. It may take some getting used to time but the most important parts are all there.

RetroUI Pro ships with the usual options to bypass the start screen of the operating system, disable the Charms Bar and hot corners and various theme related options. What sets the program apart however is the Enforce mode which brings two features to the table that the majority of applications do not.

The first thing you will notice is that the taskbar of the system is also displayed on the start screen. This gives you direct access to programs you have been running on the desktop, as well as the start menu, clock and system tray. 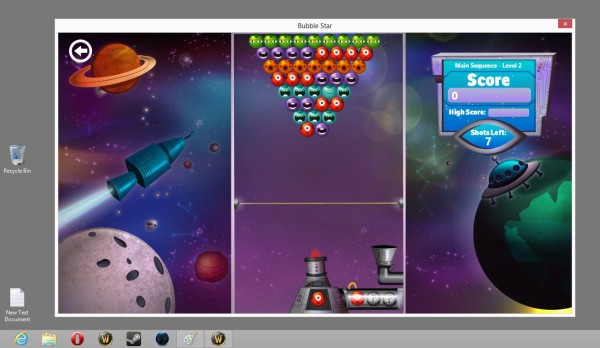 The second Enforce feature is the option to resize Windows Store apps so that they do not run in full screen but in a window on the desktop. Note that this seems to be limited to one application at a time, and that switching away from the app will hide it. You can still bring it back to the front with Alt-Tab but it will be in near maximized state again and not its previous position and size. While that is certainly limiting, it shows that it is possible to run Windows Store apps in windows on the desktop. It is likely that we will see progress in this area in the future so that the feature becomes more usable over time.

A 7-day trial version is available at the developer website. Note that you need to install RetroUI Pro 2.0.0 and the patch for the program afterwards to get the new functionality.

Update: A recent RetroUI Pro update brings much needed improvements. The program automatically stores Windows Store apps window positions now which was one of the things that I criticized. You also get full multi-monitor support, improved window handling and support for 22 additional languages.