The latest company to announce a free start menu program for Windows 8 is Stardock. Start8, which will be available later this week, adds a start menu back to the Windows 8 desktop. The program has just been announced on the official website.

The Windows 8 Consumer Preview is available and has taken the Windows interface to a whole new level. Unfortunately, the preview did not come with a desktop feature that the world makes use of billions times a day, the â€œStartâ€ menu. Luckily, we have a solution!

Judging from the screenshot, Stardock's solution copies the Metro search and application launch interface to the desktop. At least the design looks exactly like the Metro Search page layout. According to the product page, the start menu allows you to search for and load applications without switching to Metro first. Stardock in addition has added run and shutdown options to the start menu orb.

It is too early to tell if this start menu concept will convince Windows 8 users, or if they prefer to install a traditional start menu instead.

Windows 8 users who'd like to be informed when the first version of Start8 gets released can enter their email address on the official website. As I said earlier, it is not necessary considering that the program will be out in the coming days. Just check back on the Stardock website or here on Ghacks, and you can be sure that you won't miss the release.

Stardock's implementation looks completely different from the ViStart option. Which option - or none at all - do you prefer and why? (via Caschy)

Update: I just received the download link and have installed the program in the Windows 8 Consumer Preview. The start orb gets automatically added in the right spot during installation. When you click on the orb, you get a Metro like interface that displays your apps there and the search. It replicates the Metro search options. 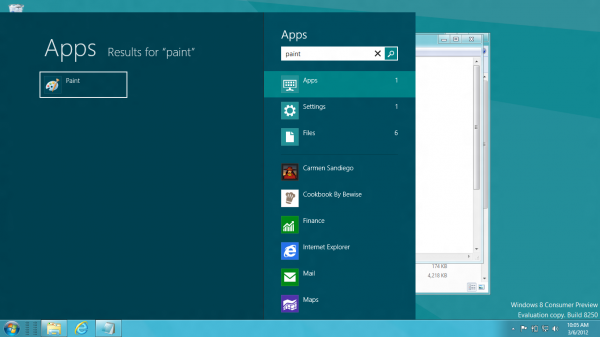 You can start typing right away to find apps, or click on one to open it directly. A right-click opens a context menu with options to run applications or shutdown the computer.

The interface is as responsive as the Metro UI interface when it comes to searching and starting applications. Interested users can download the program from this location.