SlimCleaner is a popular PC maintenance and optimization software for Windows that can best be compared to programs such as Advanced System Care or Comodo System Cleaner.

It is an all-in-one program that combines CCleaner-like capabilities with options to optimize the PC. I suggest you check out the SlimCleaner 3.0 review for an overview of that version's capabilities.

Update: The application does not support software update checking anymore. While there is still a free version of SlimCleaner available, it limits its functionality to removing temporary files and history traces, and to manage large files and startup items. End 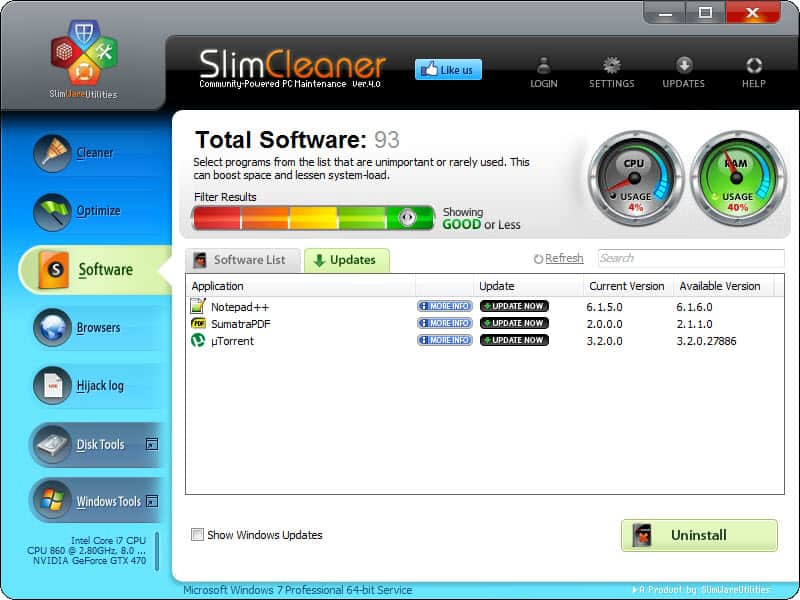 SlimCleaner 4.0 has just been released as a beta preview version that introduces several new - interesting - features. The program is not available as a public download yet, you can however visit this page, enter Betanews in the form, to download the beta version right away if you like. It is however likely that the new version will be released soon.

The developers have not modified the program interface of the application. All new features have been added to existing modules of the program. Probably the most interesting feature addition in Slim Cleaner 4.0 is the new software update checker. Previous versions of SlimCleaner made use of the cloud to rate installed programs on the system to highlight applications with a low community rating.

The new updates tab lists all identified programs that are not up to date on the computer. It takes a couple of seconds before the list gets populated.  The good news is that you can trigger the software update right from the interface. SlimCleaner downloads the update and triggers the installation of it afterwards, so that you do not have to browse around on developer sites or third party download portals to download the latest version of an application.

Not so good is the lack of information here. You do not really know where the update is downloaded from and can't verify its integrity because of it. Options to open a download page manually or to visit the developer homepage are missing. The updating itself is very comfortable though and most users will probably not have an issue with it.

The program found three updates and 93 programs on a test system. Sumo, another popular update checker, found 18 updates, of which 7 were for Open Office (the program listed all Open Office modules individually) and some beta versions. Sumo on the other hand did only list 68 installed applications, but listed updates for programs that SlimCleaner 4.0 did not list yet. The Notepad++ update for instance listed version 6.1.6.0 and not todays 6.1.7.0 release).

The software update checker is without doubt the most important feature of SlimCleaner 4.0. The developers have integrated other features into the application:

Additional information about the SSD optimization and the update servers the files are downloaded from are necessary to improve the understanding and trust that users have in the application.

Update: SlimCleaner has responded to my inquiry. Here are additional information about downloads and SSD Optimization:

1) Software updates are downloaded from our cloud. All updates have been scanned for viruses using our CloudScan technology, which scans files with multiple antivirus engines.

Defragmenting an SSD was a discouraged practice when SSD's first hit the market due to their low write endurance. Rewriting data on early-model SSDs shortened their life span significantly. Early SSD's only had about 10,000 write cycles. They have anywhere from one to five million write cycles these days. This has improved endurance drastically on SSDs, to the point where the drives could potentially last decades with regular use. Basic math says that even on cheap drives you would need to rewrite every part of the drive, every day, for 10 years straight, to even come close to reaching the maximum number of write cycles. Thus, there are virtually no negative effects from running an SSD optimization.

I was told that the beta is definitely not final and that there will be changes in the final version.