The two interfaces that Microsoft has implemented into Windows 8 are a major change from previous versions of the operating system. Instead of just having to work with the classic desktop, users now have to cope with the newly added startpage that Microsoft is pushing and the classic desktop. While it is certainly easy to bypass the startpage using various methods and tools, like our current favorite Start8, there are other options to get used to the situation.

If you are working on a PC connected to multiple monitors, you can for instance display the startpage on one monitor and the classic desktop on the other.Another option is to snap an app or the desktop to the left or right side of the screen to make it available there.

Start Screen Modifier introduces another possibility, which may be useful for Windows 8 users who only have one computer monitor at their disposal. The program makes available the startpage interface on the desktop. 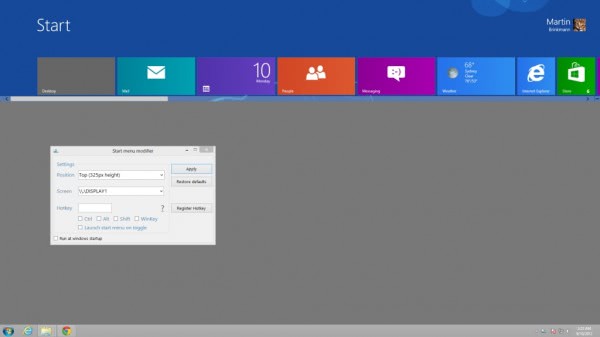 The core benefit of this is that you do not switch between different interfaces all the time, but can work with both interfaces on the desktop. You can use all the features that the start page makes available to you right from here. Search is for instance working directly when you start to type. Apps that you load are however loaded in fullscreen on the system just like before, so that search and access to live tile information are without doubt the two reasons why you'd like to use the program in the first place.

Start Screen Modifier supports hotkeys which you can use to switch between the fullscreen startpage and the startpage / desktop mix.

Windows 8 users can download the latest program version from this location. It is working fine under the final version of the operating system.

The program demonstrates that it is possible to merge the startpage with the traditional desktop in Windows 8, something that I wish Microsoft would have done to avoid the two interface issue. (via Into Windows)