Stardock's Start8 was one of the first programs to bring back a start menu to the Windows 8 operating system. Unlike Classic Shell, it moved part of the operating system's new start page to the start menu area to bring its functionality to the desktop. The advantage here was that it allowed users to use the instant search feature of Windows 8 and at the same time a larger area for start menu applications; the only disadvantage that it did not really look like the traditional start menu that Windows users were used to.

Today's release of Start8 changes that. The developers have done away with the start page implementation on the desktop and integrated a traditional start menu instead. 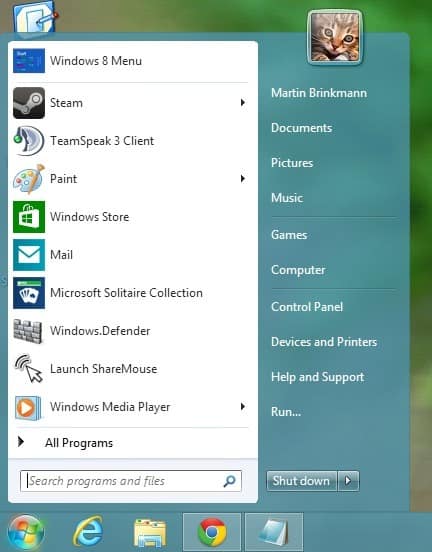 You will notice that it mimics the start menu of the Windows 7 operating system. On the left you find pinned links to programs, followed by a list of programs that you open frequently, a link to all installed programs and search. On the right, there are links to popular folders and libraries, as well as the control panel, devices, the run command and the shut down button.

What's interesting is that Stardock managed to add desktop programs and Metro apps to the start page so that both types can be launched directly from the start menu. This in my opinion is the best implementation so far as it provides you with the best of both worlds.

And you can still switch to the previous start menu with its start page like look and feel if you prefer that over the classic implementation. To do that, right-click on the start menu orb and uncheck the "use the classic style startmenu" option there. Here you also find options to disable the desktop hotspots that enable the Charms Bar on the right and the app listing on the left, and the pre-selected option to go straight to the desktop bypassing the start menu on log in.

You can still visit the startpage either by clicking on the pinned Windows Menu entry  at the top of the start page, or by selecting to run one of the Metro apps that are all listed in it as well. You can't use the Windows key to go there, as this has been remapped by Start8 to open the desktop start page instead.

I could not get some of the context menu features to show up that Stardock added to the latest version of the program. The video below for instance shows additional entries to change the size of the start menu or to remap the Windows key to load the start page.

Take a look at the following introductory video:

This is the best implementation that I have seen so far. While some of you may disagree because of the Metro apps that show up in the start menu, I do not think it is something that should really bother you. If you do not run Metro apps at all, you won't really see them pop up in the list of popular programs that you have accessed.

Previous Post: « PasteAsFile: Save Windows Clipboard entries to files in Windows Explorer
Next Post: Should you get a Windows RT or Windows 8 computer? »