Classic Shell Adds A Start Menu Back To Windows 8

The latest program to add start menu support back to Windows 8 is Classic Shell, a collection of programs that is bringing classic Windows interfaces back to versions of Windows where they have been removed in.

Classic Shell has been updated recently, and with the release comes the long awaited classic start menu that it adds back to the Windows 8 operating system. The feature is currently supporting the Windows 8 Customer Preview released earlier this year, and it is likely that the program's developers will add support for the final version as well once it is released by Microsoft. 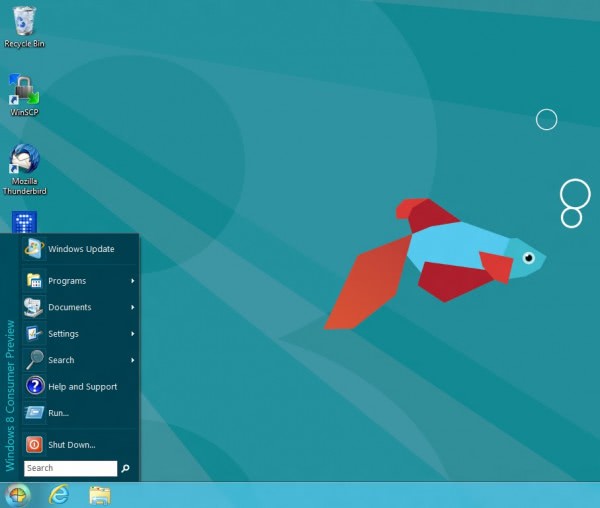 Make sure you keep the start menu option selected during installation to add the menu to the Windows 8 system. The program adds the start menu orb to the system, which opens the start menu when clicked on (or if you tap on the Windows key). Here you get the search and shutdown options, as well as links to all installed programs, recent documents, settings, the run command and Windows Update. The menu looks like the classic Windows XP start menu, and not like the start menus you see in Vista or Windows 7.

The start menu feels very responsive, even on computer systems that are a bit on the weaker side performance wise.

Classic Shell ships with three additional components that can change some program behavior and looks under Windows 8 (and previous versions of Windows as well). You can install Classic IE9, which modifies Internet Explorer 9 in several way. The plugin adds a title bar to the browser so that you can read the title of the web page all the time. It also displays the security zone and the loading progress in the browser's status bar again.

Classic Copy UI and Classic Explorer change the file handing in Windows in a number of ways.

Classic Shell is a godsend for Windows users who do not want the Metro interface, and prefer Microsoft would ship the OS without it in first place.

Update: The latest Classic Shell update brings support for Windows Store apps to the start menu. The program is listing all installed apps in a folder in the start menu so that they can be launched from there immediately.